A Musical Theatre Fish out of Water

Twice this week I’ve felt out of place and left in awe of people in my profession; once at an audition and the other at a performance of Top Hat in the West End where the divine dancers left me feeling like a lump of lard, jealous and amazed by their effortless skill.  It is that icky feeling where you feel your eyes inadvertently start widening and your heart sinking as the bad voice in your head starts listing everything that’s wrong with you.
Wednesday saw me at a casting for a new TV programme where they were looking for physical theatre performers.  I can hear your guffaws through cyber space at the thought of me embracing my inner LeCoq (Google it for those of you who think I’m being lewd) but I gave it a go as unemployed Thesps can’t be picky.


The icky feeling first appeared in the waiting room as I scanned my fellow auditionees.  There were none of the usual suspects, whose familiar faces are strangely comforting despite everyone looking similar and up for the same role, no, these faces were all new to me.  Gone were the blonde heads of highlights, under-nourished forms and definitely not a sign of fake tan.  Usually at a dance audition my tinted moisturiser, mascara and lip balm leave me looking as if I’ve just rolled out of the nearest bush next to the false lashes, war paint and hair extensions; but at this casting I looked like Jordan (minus the DD’s of course!)  Bare-faces, long Pre-Raphaelite curls and a loose trouser was the trend; I was a musical theatre fish out of water.

I have previously only been privy to physical theatre at drama school where the first year is spent contorting your body into various states.  I spent a good 15 minutes of life as condensation dripping down a studio wall and my ex-classmates and I still joke about our ability to transform into neon light and dart around.  I was a koala, part of Noah’s ark (probably a bit of timber or the rudder) and some symbolic part of a Greek ritual that involved water and moaning.
Despite my condensation capabilities I was thrust into the world of musical theatre where loose hamstrings are preferable to loose spines and it is all about the “Broadway Face.”  We work to counts, under direction and in control so could there be some inner wiggly, floppy actor still lurking behind the jazz hands?
Apparently the puppetry skills I acquired on Avenue Q were the reason I was called in for this casting.  I am not sure that running around with my dear puppets on my right arm whilst singing in twang and occasionally swishing my hair truly qualified me, but who I am to argue with a casting director?


Once inside the audition we did a fairly relaxed workshop incorporating lots of drama games that I make my poor teaching kids do.  Everybody was so imaginative and I felt positively dull and envious of their natural spontaneity.  I love to mess about with my nephew and become an elephant or nee-nah driver with ease but when asked to mime an object in a big circle of actors I was self-conscious and stumped!
The experience taught me that I need to stop being so rigid in my mind and seeing those incredible dancers in Top Hat inspires me to work harder.  Our skills in performing only look that effortless or spontaneous as a result of serious graft and dedication.  I think it is sometimes beneficial to find yourself out of comfort zone, what’s that phrase.........? 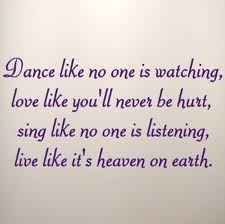 Of course doing some physical theatre back-flips or tap dancing like Fred Astaire in my kitchen will probably be so awful that it’ll be a good thing that no-one is watching but it can only be a positive step in any aspect of our lives to drop inhibitions and just go for it.
Oh, and after all that self doubt and moaning, I got a bloomin’ recall!  So I am off to don my baggy trousers and roll about my kitchen floor.....!
Posted by Daniella at 20:28