Tears of a Drama Queen

“Most of our troubles are due to our passionate desire for and attachment to things that we misapprehend as enduring entities.”


The town of Dunstable was awash with the tears of 13 emotional actors yesterday as the 2012 touring production of Avenue Q closed its last performance.  Tears as we said goodbye to each other and seven months of our lives.  But is leaving a job that lasted just over half a year worthy of such heartbreak?  Did the audience members appreciated seeing Yellow Bear yelping and Trekkie’s tears?  I doubt you’d see someone leaving a “normal” job in such a state; imagine Joe Bloggs the estate agent showing his last client around a potential home whilst gasping for breath in between sobs “ The....gulp...schools in the area..sniff....have outstanding......gasp.....Offsted results...Waaaaaaaah!!!” 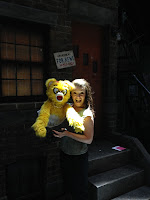 The floodgates opened during our warm-up as we posed for pictures with our puppets and were given a moving goodbye notes session from our “Gary Coleman.”  Any time I managed to dry my eyes and calm myself, another goodbye card was delivered and my mascara was forsaken again.   This lasted all day until the finale of the evening show where we all bowed together bawling our eyes out.  Being part of company is like creating a family especially on tour, you live together, row together and evolve together so to leave that is unsettling. 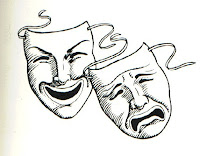 My emotional attachment to people and productions began with my first taste of showbiz aged 8.  I had played Gretl in an amateur production of The Sound of Music for the grand total of 5 performances and as a result was often found in my parents’ downstairs toilet hyperventilating because I missed “my onstage brothers and sisters,” hence, why my Mum and Dad are no longer surprised by their “luvvie” daughter and don’t let me near The Alps in case of a relapse!


My first job was in “Mamma Mia!” at the young age of 21 and I recognised my reaction to leaving it in younger members of my cast yesterday; shock and bewilderment that it’s gone so fast and fear that such wonderful opportunities may never happen again.  Your attachment to your first acting job is great and the tears reflect that; to make my cast-mates feel better, I was found in the showers of The Prince Edward Theatre after my last ABBA megamix convulsing with tears on the floor like I had lost a relative and would never breathe again.  Dramatic and ridiculous, yes, but genuine.

I have been fortunate enough to leave a number of companies and shows during the last 10 years as an actress and each last performance has caused me to shed a few tears.  But none have caused me such heartbreak as leaving Avenue Q.  It is weird because, as you have read, I have loathed touring around, missed my family and boyfriend and physically suffered during this contract.  I can’t blame it on being 21 or the wrong time of the month, I genuinely think that Avenue Q and its 2012 cast are special.  Without getting too sentimental for non-Avenue Q readers, every single cast member brought a unique quality into the mix and we created something special; be-it the physical closeness I had onstage with Chris Thatcher, Nicky/Trekkie, where I knew his every breath and reaction or the offstage closeness with Aussie Eve, Julie Yammanee, who was my touring wife and sister, or the generosity of Luke Striffler and Jonny Fines whose camaraderie was astounding as they laughed us through bad matinees as Skittles and Sprite.﻿﻿


But back to the Dalai Lama; contracts, shows and relationships do not and cannot endure and the grief comes from our surprise that they don’t.  But why are actors so bloomin’ dramatic about it?  You’d think our creative compulsions would be dying to find pastures new, other actors seem to be able to move from one TV job to another with pragmatism and realism and don’t understand our drama.
Sheila Hancock, an actress I admire and a writer I want to be, wrote that actors keep their emotions close to the surface at all times because it helps them to empathise with other humans which in turn benefits their ability to act.  I may end up with emotions spewing out of me at every angle over shopping in Asda or losing a shoe but those emotions hopefully help me to get under the skin of the next character I wish to inhabit.  (If you haven’t read any of Sheila Hancock’s books....DO! I thoroughly recommend “The Two of Us” her autobiography and biography of her late husband John Thaw as a study of love and grief.  Also, “Just Me” where she attempts to re-build her life after his death and the earlier, brilliant “Ramblings of an Actress” which is what I pray these meanderings of mine may end up like day.)


Everyone on Avenue Q, including myself, will of course move on.  Arina Il put it very eloquently by likening the end of a show to breaking up with everyone individually and you always ‘get over’ even the worst break up because life goes on.  We are left with the amazing memories and achievements but equipped with more skills to move forward.


Good luck to all of my dear cast mates and thank you.  We should be proud and now must be brave, others may not understand our tears but they came from our “passionate attachment” to our show.  And hey, we wouldn’t be proper “luvvies” if we didn’t cry ridiculously, you need a degree in Musical Theatre for that!
Posted by Daniella at 21:10