I had a bad habit when I was younger of leaving pieces of fruit in my school bag.  Not just until the end of the day but for prolonged periods of time.  I have an image printed on my memory of my poor Mum pulling out a smelly splodge formally known as “banana” from my rucksack with a look of shock and rage.  This was later repeated with a plum, I didn’t mean to, I just forgot.


These memories haunted me in Hull.  Our dressing-rooms were underground and after weeks of rain they all smelt pretty damp, dressing-room number 8 in particular.  Aussie Eve and I lamented our fate as the stench grew and grew until we became convinced it must be a dead mouse or rotting corpse somewhere.


In fact I have to say that my main memories of Hull will be entirely olfactory; strange aromas in the dressing room, on the streets and in my digs.  I have previously enlightened you about the digs debacle on tour.  You sometimes get a gem; nice people, clean bathroom etc, I seem to bypass this blessing and the stars align to strengthen my character or give me blog fodder.  Not since the limbs nestling in the Welsh topiary bushes have I giggled so much on my arrival somewhere.


﻿ I awoke each morning in Wendy, John and Michael’s nursery as created by JM Barrie in Peter Pan.  In this revival Nana the dog was a smelly greyhound, I had a rocking horse, Victorian toys everywhere and a large window that unfortunately Peter didn’t whisk me out of towards London.  In all honesty, parts of it were quite beautiful but that much antiquity in one space is oppressive and creates a smell from 100s of years ago.  It also depressed me that the ornate dresser shook against the wooden floors as I walked past making me feel like a ten tonne Tessie.


I wish I could say that I at least woke peacefully in my nursery but I was roused on the first morning by a piercing doorbell at 7am that repeated every few minutes and culminated in a very noisy tool starting to dig up the pavement outside my window.  Grumpy was not the word and I became downright grouchy when the doorbell started again one hour later.  With no sign of my landlady, I stormed downstairs in my floral pjs greeting some poor workman at the door with a grimace and my early morning face (which even with constant Clarins-ing is pretty ghastly first thing.)  “I don’t know what you want me to do,” I raged, “I don’t live here.” The kindly workman, who was covered in rain and had been working since 7am, was much more polite than I deserved “Just need someone to move this car so we can carry on, love.”  At this point said landlady appears in a dressing gown and takes over as I flounce back to bed ignoring her calls of “I am so sorry!”


Four hours later, in a better mood and my features in their rightful place, I went and apologised to the poor workman who was gracious once again but still continued to drill that pavement every morning from 7am.


My lack of sleep did not help my reaction to the daily enigma that was the dressing-room pong.


We were kindly moved to another room but despite our scented candles that room stank too?  The plot thickened because when we returned to room 8 it was now free from smell.  “Oh my god it’s us!  It’s us!” we screeched, pulling our suitcases apart and sniffing every item of clothing we own. 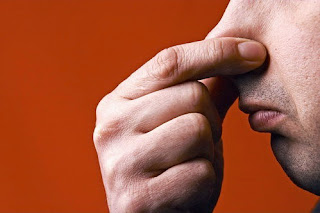 In the 30 minute run up to the show that night, fellow cast members dropped by to agree we smelt vile and gave helpful suggestions to what it may be; have you checked your shoes for mice?  It smells like off yogurt!  Do you think a mouse is maybe trapped in the lining of your suitcase?  I grew more anxious whilst Aussie Eve put on calming music and applied more eye shadow!


So we decided to do a smell ratio test.  We would place various items in dressing room 8 to see if the smell returned and reconvene during the interval.  My cod liver oil tablets were the first to go; "no change," reported Aussie Eve in the wings; we were like the Scooby Doo gang.  Next went the bin and to our relief and horror the smell ratio in room 8 rocketed up and was wretched by the interval.  Mystery solved.

It was the bin.
But why was it the bin in the new room when we hadn’t moved it from the old room?  There must be a common denominator?  It was at this point that I felt the heat rise up my neck as I remembered lovingly preparing some turkey and spinach at home on Monday morning in Tupperware to give me some nutrition during the week.  But instead of eating it on Monday evening, I abandoned it for a cast trip to Nandos instead and there my Tupperware stayed until I popped in the bin of our new dressing room.


So it was me and the return of my 8 year old ways.  I can hear my mother laughing through the internet, rolling her eyes that her daughter will never change.  I make a public, blogging apology to the company of Avenue Q for assaulting their nostrils and to Aussie Eve for making her doubt her cleanliness!


I have a problem with rotting food.  If I ever get back to London I will find some self-help group to help me become more socially acceptable!


So with the pong, a Lazerquest tournanment of International standards, a pub quiz and the threat of theatre floods I can agree with a local cabby who proudly said.......