I don’t think we can ever complain again that musicals are just for the cultural elite; with Mamma Mia! Chicago, Nine and now Les Miserables going celluloid there can’t be many people left who haven’t heard of musical theatre.

The amount of press surrounding the opening of the Les Mis movie this week has been impressive; constant interviews, features, live screenings of the premiere and did you know the actors sang live???  The world has Les Mis fever,  (which if I were to be historically correct would be cholera, so hopefully we haven’t!)  As a former “Miserable” myself I am of course thrilled and excited to see the story close to my heart on the big screen but there is also a tiny part of me that squeaks “ Ah but it was ours and now everyone has a piece of it.”

Ask any performer and they will tell you that their love affair with the Boublil & Schonberg musical began at a young age.  In the press interviews for the movie we learnt that Eddie Redmayne sang along to the soundtrack in the car as a child and both Amanda Seyfried and Hugh Jackman have loved it for years.
I, too, have a long and personal affection for Les Miserables.  My grandparents took me to see it when I was barely 10 years old and I must have been a further 4 times before appearing in it myself at 23.  I vividly remember the effects of the Revolve and swirls onstage in (SPOILER ALERT non movie see-ers) Javert’s suicide from the Dress Circle.  My next memory is seeing a boy band member from North & South (do you remember them?  See, Sir Cameron was “celeb” casting back in the 90s) giggling during the barricade scene.  Sitting a few rows from the front I was aghast that any could giggle when (SPOILER ALERT 2 ) Eponine had just died and remind me that this world wasn’t real.  If only I had remembered that on a 2 show day myself years later.
Now this is an embarrassing fact should any fellow Thesps that may read this, but at 16 years old I partook in one of those workshops.  Yes, I and 30 other amateurs paid silly money to spend 3 days at Pineapple Studios rehearsing sections to perform on stage at The Palace Theatre.  Oh my goodness I loved it, I was in heaven!  Meeting cast members and singing the songs I had only previously sang in my bedroom; it was a young aspiring Les Mizzers dream!
I was then lucky enough to “dream the dream nightly,” 2 year long contracts at The Queen’s Theatre in 2004 and then in 2009 and my 8 year old self was content.  It really is a dream show to do; countless characters to play each night, a costume plot that’s faster and more complicated than your on-stage plot and long wigs covered in fake grease!  It was a shock coming from the sunny Greek beach in Mamma Mia! where you were given highlights and fake tan to the disease-ridden streets of Paris where you were handed rags and a packet of baby wipes.

Les Miserables should be sponsored by baby wipes; you must use a pack a week scrubbing off dirt/whore make up/more dirt/Paris dirt/more dirt.  My pores were stuffed with enough brown pan stick to make a beautician gasp through the magnifying mirror during a facial.
Audience members also think that the cast are a bunch of obese heifers as the musical begins, but that is because we are wearing our first 5 costumes one on top of the other.  If you think the camera adds 10 pounds Anne Hathaway, think of us poor on stage lot!

Like any job you have the highs and lows; the high of performing for HRH The Queen at Windsor Castle and having your picture in Hello! Magazine, (no higher accolade according to my dear Nannie Julie) and the low of performing in ridiculous heat under layers of wool in your underground dressing room with no natural light or air.  There was a power cut one night in the backstage areas of the theatre but because front of house was fine the performance went ahead.  So the audience sat enjoying this classic as we bumped around in pitch black, bashing heads, crying and applying dirt by the light of a camping lamp.  Oh the glamour of the West End! 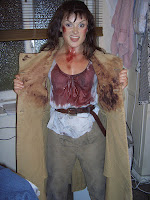 Les Mis is 27 years old and so has alumni to rival any other show; it’s like The Bill of the musical theatre world; everyone has been in it at some point in their careers!  At the risk of sounding ‘wanky’ it is a family that welcomes you back in, even after you have departed the barricades through a haze of last night tears clutching your stolen bounty of whore gloves and Tricolore badges.  I have been lucky enough to be invited back for 25th Anniversary concert at The O2 in 2010 and more recently to audition (but not get) the film, although I did have 3 glorious recording sessions at Shepperton Studios singing for the soundtrack.  It never gets boring to sing that incredible music and to be able to do it with huge orchestras or wearing headphones in a studio watching clips of the film under the direction of the enigmatic Stephen Brooker, is both a guilty pleasure and an honour.

For me, Les Miserables is like a first love; that first relationship that teaches you all and nothing about love but remains in your heart throughout all future relationships.  A love that defines you and always comes back to haunt you.


“Do you hear the people sing?  Lost in the valley of the night,” well, I always will hear that music in some shape or form because the 8 year old girl inside me who dreamt of being Eponine will never get over her first love!
Posted by Daniella at 09:12