I have never been one for athletics; as April rolled into May I would sit on the second floor of the languages building and pure dread would shudder through me as I watched the white lines being painted onto the school field.  The athletics season was starting in P.E and I could do nothing to stop it.


I would be required to be sporty and excellent regardless of my pubescent pudge and short legs.  I did fairly well at the event called “getting out of it,”  I cited long-term asthma (actually it was eczema, but I thought if they sounded alike then they must be the same) as a sick note from long distance badges in swimming and I had dodgy knees for about 3 years every time the 1500m race came around.  In fact the only event I did compete in on Sports day was Shot-Putt.  Insert your own jokes here, I have heard them all and am still embarrassed about it!!


No wonder I was a podgy little teen and how I transformed into the running freak I am today completing a half marathon last year I will never know!


If I am honest, I felt a similar dread as the Olympics loomed earlier this year.  I joined in the moaning Londoners ranting on about transport failure, road closures and “look what happened to the Greek economy after Athens 2004, that’s all I’m saying.”  My previous Olympic viewing was limited to Sally Gunnell and Linford Christie’s famous one-piece so I didn’t even feel compelled to enter the ticket bid.


But what an uneducated fool I was.


From the moment I caught the last hours of the opening ceremony in the Dunstable Wetherspoons I was enchanted by the honour and spectacle and succumbed to all of the hype. What a grand and self-aware piece of brilliance to be proud of.  I cannot say anything more unique about the outstanding ceremony than has not already been enthused about in the media but I feel compelled to hold my hands up and say I was wrong. 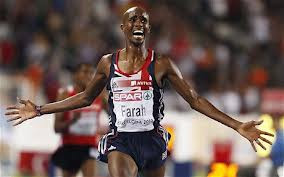 What a fascinating and inspiring two weeks this will be.  Lord Coe & Co (haha!) chose the word “inspire” as a slogan for London 2012 and it was the perfect description for the events of last night in the Athletic stadium.  Nobody, not even this reluctant convert eating a take-away, could fail to be moved by the sheer brilliance and national adoration for Jessica Ennis, followed by the bounding legs of Greg Rutherford and then the drive and endurance of Mo Farah whose win was incredible.  And what about the cycling girls?  The eldest is still only 23 and those 3 women keep breaking world records every time they mount their bikes and speed around the Velodrome.  The rowers, cyclists and athletes are out-of-this-world brilliant. I don’t want to find excuses anymore.  I admit I haven’t tried to run 10,000m today or cycle really fast but I certainly feel invigorated by the Olympics;  the actions and discipline of the Team GB athletes can be applied to us all.  The dedication and focus required to achieve greatness wouldn’t go amiss in my own life.  If I practised my craft to that extent every day, was focused on my goals and believed wholeheartedly in myself and my abilities I could be anything I want to be.
Would I be a more successful writer, actress or person if I had a tenth of that drive?  Too right I would!


So I feel a bit mad at myself today for not attempting the 1500m when I was 13 and for not pushing myself more as an adult in my career.  My awe and wonder at those athletes will hopefully obliterate any laziness and “can’t do, so I won’t bother” attitude and help me discover some much needed energy and drive.


Why can’t I be a great Briton in Great Britain?  London 2012 could make us all believe in ourselves and what an inspiration that could be.
Posted by Daniella at 17:09