Walking the streets of Oxford Circus in London last week was slightly unnerving for me.  Not because I have a phobia of tourists or teenagers with a penchant for TopShop but because it felt frenetic.


You know those scenes in movies when the protagonist stays in real time whilst a New York street whooshes around them to illustrate their confusion or mental breakdown, well, that was me.  Slightly less dramatic and glamorous, but you get the feeling!  I felt like London was rushing away from me and I couldn’t keep up. 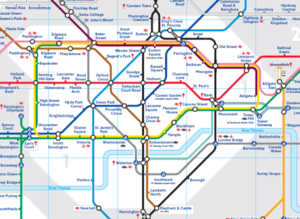 I used to live in central London; au fait with the pace of life and often seen on a night bus at silly 0’clock.  I had my designated spot on the tube platform so I could get off at the exact place at the other side (pathetic, but I know most Londoners will admit to that) and I had my “London walk.”  You know the one that leaves visiting suburbanites agog as you power through any crowd with commuter determination and detachment, you take no prisoners in order to make the 18.08 train.  No “women and children first” you ditch the weak because they only slow you down; I would leave poor family members in my wake after they came to watch me in a show on my mission to get to the tube.  Sadly, this is an accurate picture of my London selfish 20s- self and she had certainly deserted me last week as I shuffled along with a distinct lack of my usual vigour.
So has London sped up or have I slowed down?  I have been away on tour for 7 months navigating the much quieter streets of Rhyl and Dunstable so have definitely been “out of the loop” and London has been energised by our Olympic love affair.  But I think the best explanation is that I have spent much of August camping in the Lake District.

There are nearly 300 miles between Kensington and Keswick but it feels a million.  But catch a glimpse of the crags and fells of Cumbria and London doesn’t even enter my mind despite the odd buzz of my iPhone if I ever find a patch of signal!  I have exhaled for the first time since January and tension has slipped away; you cannot help but feel insignificant when faced with such natural grandeur and maybe that’s why I feel weird in London?  Everyone feels very significant there, well, to themselves anyway.

The Lake District is both tranquil and awesome at the same time, you don’t think twice about waiting 17 minutes for a camping kettle to boil because you are happy to sit, breathe and appreciate the epic view.  People who know me and now probably guffawing at their computer screens or think I’ve been abducted, but IT’S TRUE!!  The only stress is over which path to follow on a hike!


Ok, that is a little bit of a lie, camping can be fairly stressful if you are known to (sometimes) be high-maintenance, like I am.  I suffered severe dehydration overnight, not wanting to drink too much fluid before bed because a dry mouth and headache was preferable to the 5 minute amble to the toilet in my wellies with a torch at 3am.  I managed a few decent nights sleep but an airbed is wrought with problems; your boyfriend ‘claiming’ it is slanted, thus making him obliviously roll to the centre of the bed as you cling to a free corner, or waking up with your bum cheeks grazing a mole-hill because the air bed has failed to live up to its name and expelled all the air overnight. 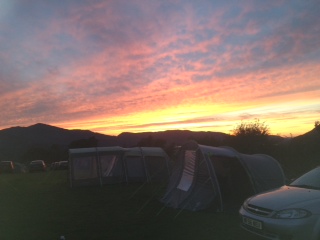 But the biggest stress is the weather.  The Lake District is notorious for rain and wind and we were lucky enough to experience them both.....violently.  One night we tried to drift off with the tent flapping furiously in the wind only to be suddenly brought to consciousness as the ceiling met my face.  Everything was blue as our tent lost the battle with the 65mph gusts of wind, we were definitely slanting now in fact the tent was virtually parallel to the ground.  My poor boyfriend struggled to hold it up and re-peg it in the rain as I helpfully screamed that “we were meeting our doom” (high maintenance, much?!)


The casualties that night were the new wind breaker whose steel poles bent under the force and my man’s belief that I may turn out to be a supportive and helpful life partner!  But one look at the view as we crawled out of the tent the next morning made us forgive The Lakes everything!  Like deluded lovers we coo-ed “Look at it, so beautiful, it didn’t mean it!”


This Londoner has fallen head over heels in love with The Lakes, it’s my new dream to become like Beatrix Potter writing on a farm there.  Post-Olympics everyone loves London or as Caitlin Moran tweeted “Everyone fancies us!”  It is vibrant and alive and I am not such an old “ramblers club” fogey that this boost has totally eluded me. Seeing the Thames lit-up at night thrills me and I still know theatre land in Soho like the back of my hand, I don’t think that will ever leave me.


So I may be less Oxford Circus and more Oxford-shire these days but I am OK with that.  I’ll take my new lessons of appreciating my surroundings on my trips to London; breathing and enjoying the view.

Who am I kidding?  Breathing in fumes and only annoying the people with a “London walk” as I behave like a bemused Japanese tourist?
That just ain’t gonna work!
Posted by Daniella at 22:08