A few years ago I had a fringe cut in (or bangs for any USA inclined readers!)  It felt daring to me at the time, I felt edgier, trendier, sexier even somehow.


So it seems to me that Fringe theatre coined the name “fringe” for a reason; not just because it is on the outskirts or fringes of a theatre community, but because it is edgier and sexier theatre. 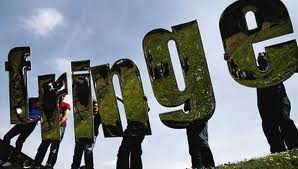 As stalwart readers may remember, I wrote a post last year about Fringe Theatre in London after working with the director Thom Sutherland, and the affect it had on me.  It was a timely reminder of why I chose this career being surrounded by people who were prepared to work without the weekly wage packet purely to create some legitimate work.  It re-launched my energy and creativity, which, as shocking as it sounds, can so easily fade in a long contract of a “big” musical where you can just feel like a cog in a well-oiled but soul-less machine.


After seeing Thom’s latest production of Mack and Mabel at The Southwalk Playhouse yesterday and having woken up this morning with it still in the fore front of my mind I feel compelled to splurge my thoughts about fringe theatre to you again. There used to be a stereotype that all fringe productions had a slightly A-Level Drama or physical theatre vibe to them; lots of mime and representing weird stuff in leotards.  Or that these productions were on the outskirts for a reason, that they weren’t quite of the West End/Broadway standard but were giving it a go.


But NO, NO, NO! And if I could make more emphasis with capital letters then I would!  The fringe scene in London now seems to be the place where we have become experimental in our craft and returned back to the roots (for some reason all these analogies are linked to hair??) of why we love and must perform theatre.  Full-size, old school musicals are happening there; Mack and Mabel, Michael Strassen’s The Fix soon to be followed by Call Me Madam (he is someone who definitely does the sexier version of fringe theatre) and I haven’t even touched on the plays.


Something about the setting of these productions, above a pub or in the Vaults of a railway, seems to make you focus on the bare bones of the piece.  The composition, the heart and the raw talent doesn’t just shine through but hits you in the gut, in a way that just can’t reach you when you are sat in a £65 seat in The Royal Balcony.  And my goodness, what talent there is.


Let me let you into a little London theatre secret, the fringe is where the talent is.  All those people who were playing leads, understudies or cameos in the last 10 years in the West End are now playing the roles they have rightfully grown into on the fringe.  It becomes mystifying and frustrating to be offered 5th munchkin from the left when you are knocking 40 and understudying someone “off the telly”


I sat next to someone yesterday at The Southwalk Playhouse who told her companion “Stop moaning, this ain’t the West End.”  Yes it was crammed, hot and clammy (unlike a West End show I had seen the night before that was only a 1/3 full) but I wanted to retort “No, it ain’t, its better,” but I didn’t need to because they were weeping with me at the end with the visceral emotion that emitted from that stage.


I am not disparaging any West End shows or the talent of its performers, I have been there myself and those guys work just as hard and are just as talented; we just don’t get to see them shine in the same way because they are masked by special effects, costume or celebrities.  Acting starts as a hobby but it soon becomes a job and you do have to go where the money is to make ends meet or to fulfil a dream and I don’t scorn anyone, including myself, who does.  But sometimes, it is refreshing to fulfil your bigger dreams and re-introduce yourself to that creative, hungry actor inside you – a bus-mans holiday if you will!


I have a bus-man’s holiday of my own coming up with a new fringe theatre company in Guildford and I know it will challenge my vocal chords in the way that puppeteering challenged my body!  So I urge you to think outside the box – seeing a big musical or play with Hollywood actors in is wonderful and well-worth the ticket but on a quiet Tuesday or Sunday head to Camden, Southwalk or Guildford and watch some performers get back to their roots and perform their hearts out.
To complete the hair analogies and mis-quote a famous product tag-line “It’ll be worth it!”
Just to get you started!.........
Guildford Fringe Company - @GuildfordFringe on Twitter http://www.guildford.gov.uk/article/10195/The-Last-Five-Years-with-The-Guildford-Fringe-Theatre-Company
Thom Sutherland - www.thomsutherland.co.uk
Michael Strassen - www.michaelstrassen.com
Finborough Theatre - www.finboroughtheatre.co.uk
www.anincidentattheborder.com now at Trafalgar Studios transferred from The Finborough and getting rave reviews
Posted by Daniella at 10:44