If the slipper fits - the responsibility of a casting director

Most people have now seen the Les Mis movie and sadly it is almost unanimous that Russell Crowe was a goddamn awful Javert.  This upset me because I have had the privilege of seeing some incredible West End actors perform Javert with the vocal and physical gravitas required to give this character strength and dimension.  Sadly, to me, Crowe looked out of place and every time director Tom Hooper swooped in for a close up we saw the uncomfortable fear in his eyes, resulting not from the wobbly roof top walking but from the wobbly attempts to act through song.  So in our fickle and judgemental way we all hailed “Crowe was rubbish!” 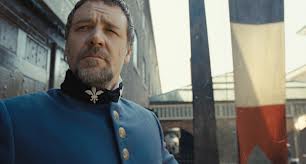 But is he rubbish?  Or just entirely miss-cast?  You don’t see Nina Gold or Sir Cameron Mackintosh being lambasted all over the Internet when he was their choice; it is Crowe  who takes the personal flack.
If a casting director cast me as the balletic White Cat in "Cats" just because they liked me as a person or thought my name would sell tickets (it obviously won’t but I’m being hypothetical! OK, delusional but bear with me..!) the Tom Hooper close up would reveal the fear in my eyes and size of my thighs and my complete lack of suitability for the role.  I may have held my own in "The Last Five Years" or "Avenue Q" but anyone who judged me on that hypothetical car crash of a dance performance would write me off as crap.

But back to Russell - I sat and watched "Cinderella Man" last night and it inspired these musings.  It is a terrific film (watch it if you haven’t seen it) with truly great acting performances from Crowe and Renee Zellweger.  He is energetic, cheeky and wholly embodies the boxer who goes from rags to riches; the close ups reveal the character’s struggle and determination not the actor’s struggle to communicate.  It restored my faith in him as an actor and made me think that the casting team do bear a lot more responsibility than we give them credit for.  Instead of their names scrolling past apologetically in the final credits, perhaps the casting director should come as a preface to the actors’ names in the opening titles.  “I, blah blah blah CDG, chose the following actors for this film, tweet me if you have any issues not the actors who are just working as cast.”

The “Cinderella Man” story had fairytale qualities and Crowe’s performances have a fairytale-like moral.  Prince Charming only married Cinderella because her foot fitted the slipper perfectly; he didn’t make do with an ugly sister because she wedged her toes in and might attract more punters at the ceremony.  Crowe’s performance was spot on in that film because the role suited his capabilities as an actor whereas perhaps the wholly different skill of acting through song is not his forte.  It’s not his fault; Eddie Redmayne probably would have played a rubbish boxer.  Fairy tales are all about fitting perfectly; Goldilocks chooses the porridge that is “just right” not the one “that’ll do.”
So hopefully this might make us more lenient on big name performances and even help us to accept the acting rejections of our own.  If a casting director says we are “just not right for the role” maybe it is a saving grace and could save us lots of backlash if we attempted a role that just doesn’t sit on us correctly.  Much of a final performance is an actor’s responsibility but keep in mind the team who put them there in the first place.
Posted by Daniella at 13:06