The Hills are Alive with the sound of Re-makes

I recently was asked to write some content marketing entitled ‘Why a re-make of The Sound of Music is a terrible, terrible idea.’  Did you all know that NBC have just aired a new live version of The Sound of Music with, country & western star, Carrie Underwood as Maria? They only gave me 500 words for my opinion, which for a subject so dear to my heart, was simply not enough.  So I thought it was rather blog worthy!

Is Roger & Hammerstein’s ‘The Sound of Music’ out of date and in need of a Goq Wan make over?

I have to say that I agree. We like our classic movie musicals to remain just that – classic.  I am only just digesting the news that they are making a new Annie movie after seeing a picture of Cameron Diaz as Miss Hannigan and Jamie Foxx as Daddy Warbucks. I respect both Diaz and Foxx, but in my eyes they can’t hold a candle to the wonderful Carol Burnett and Albert Finney. And now, Julie Andrews is being re-modelled, who’s next.......? Howard Keel?  Bless his beautiful hide - Hell, no!

I don’t think it is just us musical theatre geeks, nourished from a young age on these movies, who are the only protesters to these re-makes. ‘The Sound of Music’ is a firm, family favourite, it may provoke an eye-roll when it appears in the TV listings EVERY Christmas Day but there’s a reason for its inclusion.  It is a brilliant film.  Yahoo.com created a list of classic films that shouldn’t be touched in this era of money making re-makes, calling them ‘The Untouchables.’  They included ‘When Harry Met Sally,’ ‘Annie Hall’ and ‘Casablanca’ and surely anything with Julie Andrews in should be on it too, (well, maybe not The Princess Diaries.) 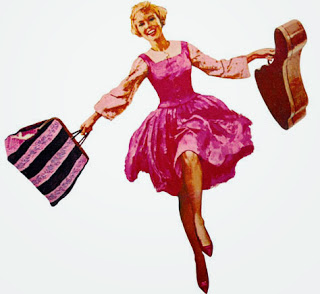 Whose childhood soundtrack, especially in my line of work, doesn’t include the glorious voice of Julie Andrews? Carrie Underwood may have a great voice but I doubt she’ll promote the same feelings of nostalgia. We love this movie for hitch-kicks holding a guitar case, lederhosen and Liesel’s pink gazebo dress!

16 going on 17.....
Time matures and moves on. Fans of movies grow up and their tastes change. I understand this. NBC said they wanted to make their ‘Sound of Music’ appeal to a modern audience by “bringing the story up to date.”  Writer Ashley Fetter from TheAtlantic.com suggested that the disciplinarian father storyline was old-fashioned and could be updated by perhaps exploring the modern idea that Von Trapp

“is just too heartbroken to interact with them (his children)”

has she not seen the original film???? Christopher Plummer invented ‘intense pain behind the eyes yearning’ way before Colin Firth even donned Mr Darcy’s breeches.  Von Trapp’s repressed feelings are a modern therapists dream.
I’m not sure how well NBC achieved this premise; the promotional photos showed an air-brushed Von-Brady Bunch scene. Like many others, NBC seems to have mistaken this classic tale to be a twee and saccharine view of the past.

The non musical story of the Von Trapp is much darker and the recent production at Regents Park proved the story to be highly political. It included all the nostalgic movie touches but really highlighted the historical context.  History shouldn’t be brought up to date, it is history. New audiences should be able to understand World War II, the Nazi Party and the Holocaust in their true context and it shouldn’t be sugar-coated or made easier to digest. It was a horrific moment in history that mustn’t be dumbed down for modern audiences. 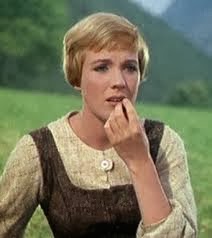 I have confidence, not just in sunshine bit also, in people. Modern audiences are not stupid and should be challenged just as people have been by culture for ‘a thousand years.’ By re-working classics are film producers suggesting that society can only able to appreciate things that are similar to our lives today? Are we too short-sighted? Or have they just run out of ideas?

The recent re-writing of Jane Austen’s novels has provoked a similar mixed reaction. Does giving the Dashwood girls social media accounts make their story more accessible?  Is it too much to hope that we can appreciate the stories of family, love and life from Austen’s own pen and without a soundtrack by 1 Direction? Writer, Elizabeth Day from The Observer brilliantly said

“I don’t need to read about Mr Knightley listening to Arctic Monkeys in his iPod to be convinced that Jane Austen is ‘relevant.’ I already know that she is.”

I believe that the Von Trapp story is equally relevant and therefore doesn’t need modernising.  But what about the argument that a musical is ‘re-worked’ every time a new production is done on stage?

We are used to seeing different productions; we expect to see musicals on stage. Their interpretations are applauded and remembered but never as definitive as on celluloid. Films get re-watched and re-watched which can define images into our minds. Productions of The Sound of Music are nearly always loyal to tradition, you never see Maria Von Trapp leaving a detention centre and the family climbing the Pennines to escape Thatcher.

I hope this new live American version was enjoyed by a new audience but I pray that it will inspire them to watch the original.

So I say ‘So Long, Farewell’ to re-makes. If it ain’t broke, don’t fix it. In fact, I may wear a dress made from curtains and drink pink lemonade whilst watching my favourite classic on Christmas Day in defiance! Join me!
Posted by Daniella at 08:33