The first time I stayed at my 2003 boyfriend's house I think I scared him a bit; nothing sordid or perverse but quite shocking none the less.
We were sat in bed watching This Morning (a standard part of every actor’s routine) and Ronan Keating came on the screen chatting to Phil and Fern. I grabbed a pillow on my boyfriend’s bed and lobbed it at his blokey posh flat-screen shrieking “Urgh I HATE that man!” much to the horror and confusion of my new beaux.
And that, dear Reader, sums up my feelings for Ronan Keating. This intense feeling has no basis and is entirely irrational but it consumes me every time I see him on TV or hear that bloomin’ "Love is a Rollercoaster" song.


So you can imagine my reaction to news that Ronan Keating will be joining the cast of Once the Musical in November.
Ronan has done nothing wrong; he's never slighted my family, spoke badly to me or indeed ever met me so there is no reason why I should have such a negative reaction to him. It’s just how I feel. He makes me want to lash out and push leprechauns over.


This isn’t a post to express dismay at yet another ‘celebrity’ taking a job from an unknown talented performer.  I think the majority of us have made our peace with celebrity casting. It is the way of our world and no amount of moaning will change that. On the whole, if these ‘celebs’ are talented, can adapt to the medium and do 8 shows a week then we don’t have a problem. And many of them do and are lovely additions to a company. It is just a transition in their own careers and isn’t their fault that the industry demands thousands of Twitter followers as an ‘in’ for an audition. Don’t bitch about the celebs earning a crust, look higher to the producers.
So if Ronan is an adept musical theatre performer and he can play Guy better than any other musical theatre male or current understudy, then I shall accept the situation graciously and applaud him for getting the audiences in.
But comments like this don’t help, Ronan- 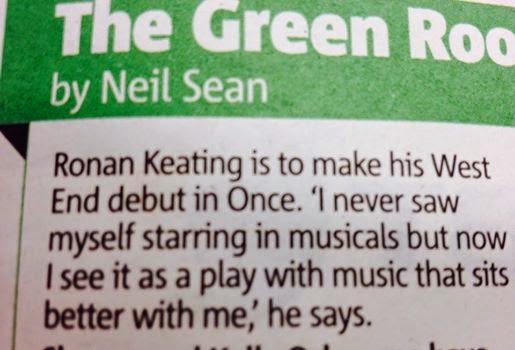 Being cast in a musical, “a play with music,” is an honour and a hefty challenge. He is right to be scared. My favourite Twitter response was from ‘current Guy’ David Hunter
After much speculation, I am thrilled to announce I will be joining Boyzone from November 17th. #JobSwap

Ronan is probably a nice guy and this unfounded bile I have says more about me than him. I am irrationally mean and should take Ronan’s advice and say “Nothing at all” but in the words of Pheobe from Friends “I hate that guy!”


I have yet to see Once but have heard fab things and I suspect I will try to see it before November 16th.
Good luck Ronan, break a leg and all that, but let me tell you - if you dare use that horrid nasal vibrato on that brilliant score I shall be there in the front row lobbing pillows at you. EVERY NIGHT.
Posted by Daniella at 08:51