Medea at The National - I am still in shock

Fifteen pounds doesn’t get you much these days.......3 coffees at Starbucks, a weekend wardrobe from Primark and it’s half the price of a Travelcard from Surrey. But yesterday, £15 got me a sensational 90 minutes at The Olivier Theatre at The National. Medea has just opened with Helen McCrory (Mrs Nicholas Brody from Homeland) as the title role giving the performance of her career.
I have yet to venture into reviewing on my blog but I was so blown away by those 90 minutes yesterday that I had to tell you about it.

Medea was written by Greek poet Euripides in approximately 431 BC. Medea has been left by her husband Jason (of Golden Fleece fame) to marry a young princess. Reacting to this betrayal after she gave up her family for him, she vows to revenge him. She murders his new bride but it’s not enough to truly wound Jason forever and so she murders their two sons. WTF! would be the response of modern folk, but McCrory’s performance is so forceful that you like her, pity her and understand her logic. It is a study of heartbreak and grief and how these emotions can unhinge you.

The first image of Medea smashing rocks in the middle of a dark, gnarly forest firmly plants the idea that she has the ability to be feral, physical and wild. It was like stumbling upon a sacrificial ritual which is immediately shocking. But then she appears slouching around, cleaning her teeth and smoking roll ups. The set reveals the tangled trees with empty children’s swings hanging from the branches amidst the tattered Greek home with the glitzy wedding above, enclosed in glass. Clear cut and yet a tangled mess. 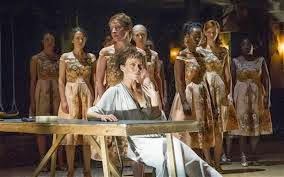 The Greek Chorus, oh how I loved them. They were a most effective and beautiful part of the production. A gorgeous lady I did Oklahoma with years ago, Vivien Carter, was one of these women in a peach dress and I was so in awe of her. The chorus are vital in any Greek play, commenting and advising the protagonist; here these Stepford Wife-esque Women of Corinth sang lingering music composed by Goldfrapp and created pulsing movement through contemporary dance. They were unsettling, beautiful and haunting- just brilliant. The dancing was used to horrifying effect as Medea exited to slit the throats of her two young sons, I was genuinely appalled and had my hands over my face but my god, it was fabulous.

There aren’t enough adjectives to justly describe McCrory’s performance. She is all sinew (I need to know her fitness regime, she looks incredible) with emotions so raw that her costumes shudder with the ferocity of her feeling. She is funny, sexy and wholly engaging; a 90 minute master class in connecting to text. 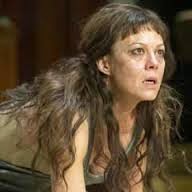 I heard an interview on radio 4 with the writer, Ben Power, who said that “during rehearsals we spoke to criminal psychologists and grief specialists who were astonished by acutey with which Euripides describes this emotional trauma.....2,500 years before psycho-analysis he is describing grief and trauma, the stages of grief, the movements between grief and anger with absolute pinpoint precision.” If you don’t listen to Front Row yet on Radio 4, do it!

Some reviews have suggested that Ben Power’s modern adaptation has lessened the poetic meter of traditional Greek theatre. Greek purists may hate the contemporary costume, iPhone selfie and children moronically staring at tablets and televisions but I appreciated it. 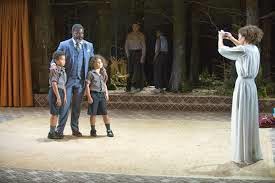 The modern setting only highlighted the constant relevance of the text and I think made it more accessible to an audience. Greek theatre, like all of the classical texts can be off-putting to some audience members “Oo that’s a bit dark for me” or “I want to be entertained not use my brain” But with stories like the woman in Utah on trial for murdering her 6 newborn children only this week and Mikaeel Kular’s mother admitting she killed him how more pertinent can this play be? 2,500 years later we are still plagued by mental illness, female inequality and heartbreak. To be honest I may have struggled with Euripides’ original rich text for 90 minutes on a humid Saturday afternoon, Ben Powers’ adaptation kept me as engrossed as a teenager on an iPad.

Oh my gosh I can’t tell you enough how bloomin’ brilliant this production is; GO GO GO! I left inspired, thoughtful and in need of a stiff drink. Helen McCrory is exceptional and the ticket is 1/6 of the price of many top West End musicals, it’ll be £15 well spent.
Posted by Daniella at 19:43