The Good Canary gives us a good shake-up

We all get stuck in ruts and routines but sometimes life sends you a curveball to shake you up a bit. Although highly comforting, I think it can be good to be shaken away from your safe place. We can often cocoon ourselves in so tightly that we miss exciting opportunities that could change our perspective on life and our direction.

This has certainly happened to me since the last time I last rambled on here, less of a curveball and more of a juggernaut actually found me over the summer, and despite being ripped from my moorings, I am thoroughly enjoying this surprising turn of events. 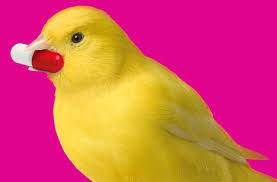 Amid my turbulence came an invitation to see The Good Canary at The Rose Theatre, Kingston and with reflection it seems a fitting production to experience at this time. It certainly isn’t the usual fare for outer London suburban audiences, less chuckling Ayckbourn and more Channel 4 gritty drama. Indeed, some folk sat around us seemed surprised not to see Stephanie Cole, or the like, reciting a jolly tale with a predictable ending but I love that The Rose has such exciting productions, they invigorate audiences and theatre in general - just what we need in my opinion. Only yesterday, I read that The Rose has more exciting productions for their next season including an adaption by April de Angelis of the highly popular Elena Ferrante novel, My Brilliant Friend.

The Good Canary, like the title suggests, is a bright yellow blast of a play rattling around in a cage, a story that reels you in and spits you out exhausted by the end. Zach Helm‘s script explores the relationship between Jack, an up and coming writer, and his wife Annie, who struggles with drug addiction and mental illness. I am always drawn to dialogue between a couple spiralling into self-destruct mode (scenes in Matthew Perry’s The End of Longing earlier this year left me devastated me with their accuracy) and there are certain moments in The Good Canary that capture the despair as Annie and Jack fail to communicate. Most interestingly, is a scene where no words are spoken at all.

It’s an invigorating, ice bucket challenge of a production, a fresh and exciting addition to The Rose’s season. Not to mention a huge coup to get the legendary John Malkovich as director. Actors must have been falling over themselves to get this gig, as I imagine the punters were on press night to grab a selfie with him. So was his direction worth his fee? I bloomin’ think so – it is fast paced and utterly suited to the text. Malkovich seamlessly engineers the actors amid big screens and projections; the effect is ultimately filmic and terribly fitting. I was led along and engrossed in the action. The play really worked for me in the sections where the medium was embraced; the mania of Annie doing housework on a high as the projections morphed in shape and a seamless almost dance of the drinks party as the guests slink around social conventions. 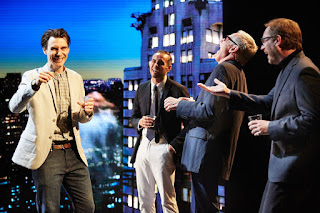 Steve John Shepherd channels  Jeff Goldblum as Jack’s agent  and the party-hosting mogul is played by Michael Simkins, (you know from my past blogs how much I adore him) here he is suitably suave and sexy and I wished to see more of him on stage. In fact, many of the other characters felt on the sidelines, you don’t get to find out much about them or their back stories (to discover more about Sylvia’s character would have been fascinating, a great cameo from Sally Rogers) but maybe that’s how it’s meant to be; the self absorption of Annie may mean that people around her appear two dimensional in her world. Just a thought. 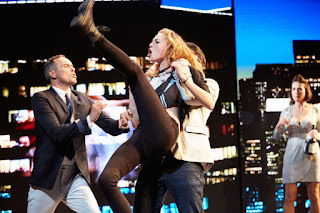 But in spite of the movie star director and sexy Simkins, Freya Mavor is the main attraction and the reason why you need to go and see this play. She gives a powerful performance as Annie – focused, physical, raw and mature. Doing that eight times a week and twice on matinee days is quite a feat and without giving anything away, her performance at the end of Act 2 is exceptional.

So as I embrace opportunities and take the metaphorical ‘bull by the horns,’ so should you. Go and see a play this week. Go and see this one. Don’t slope into autumn, not yet, there’s plenty of time for Hooga, rugs and boxsets, get to Kingston this week to see a truly exciting piece of theatre.
Posted by Daniella at 12:01