The Good Ol' Days - thinking like my Grandad on his birthday 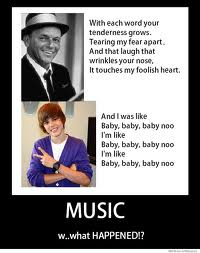 I saw this picture on Facebook this week and yelled “Yes” this is exactly what my Grandad and I sit and chat about.  As a music lover and being involved with bands at a young age, my Grandad has firm ideas on what makes a good song; “You have to be to come away humming the tune” he says, sadly does not apply to all of the musicals he has sat through because of me.
Yes, you might get the tune of “Here’s my number so call me maybe” on a loop in your head like some kind of Japanese torture but compare the lyrics with ‘old standards’ as this picture does, and it makes me weep.  If you ever meet my granddad, ask him about his opinion on modern song lyrics, his impression is hilarious.  “I walk down the street.... go up the path....... and ring the bell” in a wonderful monotonous drone, “it means nothing” he sighs before chatting about Matt Monro or Sinatra.

I have often thought that I was born in the wrong era because I agree with my Grandad entirely.  I choose lindy hop over hip hop and I couldn’t name you any song in the charts now since I stopped listening to the Top 40 on a Sunday night!  As my last post proved I am more High Society than We Will Rock You and as for my desire to be in Downton Abbey.....don’t get me started! (9pm this Sunday people, hooray!!!)

Change has always unnerved me.  I remember watching Alan Ayckbourn’s play Comic Potential where “actoids” had replaced actors in television soaps and I was distraught that the profession I dreamt of entering may succumb to robots before I got a chance to go to drama school!  It genuinely worried me!  Although we have yet to see actoids, you could argue that a few robotic performances have slipped into theatre and TV but that’s a whole different rant!

The fact that you can control the thermostat of your home via your mobile phone and effectively buy everything you need online and never see a shop again doesn’t make me applaud modern science, it scares me!  I like shopping in shops, talking to people and don’t want robots choosing my clothes for me in my wardrobe! Although if they want to clean my bathroom......?

If you think about how far the world has developed in just the last 150 years and the rate at which technology and medicine has advanced it can make me shudder to think about what our lives will be like by 2050.  Maybe I won’t be an arthritic 69 year old?  Maybe Death Becomes Her could come true and I’ll look exactly the same, although with a few improvements!

So why do I hanker for a simpler time?  Well history seems glamorous to me.  Hollywood stars had an air of mystery that made them appear to be grander beings, you didn’t see pictures of Lauren Bacall with her cellulite circled in the newspapers and despite the publicity surrounding Elizabeth Taylor and Richard Burton their relationship certainly had more grace and glamour than the on/off drama that was Jordan and Peter Andre.

Libraries are bursting with compilations of letters by Jane Austen, Oscar Wilde and diaries of Samuel Pepys and Joe Orton but what will my children have to look forward to, an e-book of Marian Keyes’ tweets or Stephen Fry’s blogs?  We still have great wordsmiths and writers but I pray that their words will be recorded correctly and wholly instead of in the style of many 16 year old English GCSE exam papers “Midsummer Night’s Dream was gr8 and Bottom made me laugh lol!” 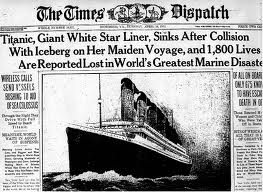 Without computers or telephones people used to have a desire and need to communicate effectively.  I read some newspaper articles about the sinking of Titanic where every single part of the launch was described in such detail; pages and pages describing the colours, weather and atmosphere.  They did this because there were few photographs or videos to show on the TV and this was the only way for people to experience the news.  It was so well-crafted and beautiful to read but you could argue time-consuming compared to watching a clip on YouTube.  Which would you prefer?
Sinatra sang “Fools rush in, where angels fear to tread,” whereas 2 Live Crew shouts “Face down, A*s Up, That’s the way we like to f*%k!”.........I know.  You should have seen my face the first time I heard that in an Avenue Q physical warm-up.  Granny Dani was not impressed.

Don’t imagine I choose to live a simpler life without TV or a microwave ‘a la Felicity Kendal in The Good Life’ as some kind of moral stand; I indulge in all of the luxuries that the 21st century can offer.  Despite resisting the iPhone for years with diatribes about losing social skills you now find me checking Twitter as soon as I open my eyes and shamelessly using my Google map as a walk along unknown streets.  You do have to move with the times or you get left behind but it doesn’t mean I have to like it all. 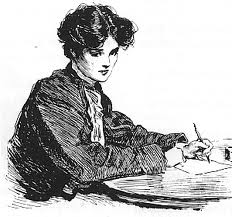 I will take advantage of our incredible modern medicines and Skype loved ones far away but I shall also listen to classical music whilst reading historical fiction, wear tea-dresses, use grammar in my texts and write letters to people.  And most importantly, I will continue to wish that my boyfriend will walk on the outside of the pavement to prevent the horses and cart splashing mud on me, chivalry isn’t dead yet, my Grandad taught me that!
Posted by Daniella at 13:31