I’ve been asked to make a speech at my old drama school for the newly enrolled students and I am terrified.  My immediate reaction is what do I have to say to 75 slightly pissed students at the end of Fresher’s week?

I am hardly an enticing alumni option; they could have had Michael Ball, Brenda Blethyn or even Beppe from Eastenders. Young people these days aren’t impressed by normalcy, they want to hear words of wisdom from someone ‘off the telly’ or at least from the final 10 of a TV talent search, not some West End understudy who they’ll all probably meet in an audition dance call in 2015 for “High School Musical 7 – the Adult Ed Years.”


I haven’t made a speech since I entered a debating competition for my Year 9 English class.  I discussed the merits of co-ed education against single sex schools reading my cue cards and shaking like a leaf.  I, like many actors, would rather perform to 1,000 people in a darkened auditorium than for 5 in my lounge.  There is something safe about hiding behind a character, a costume and somebody else’s words.  I feel vulnerable and metaphorically naked having to stand and orate alone, thank god I’ll never have to make a best man’s speech. 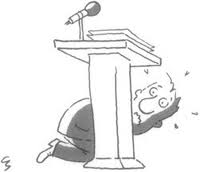 I could lie on the psychologists couch and discuss why actors are so insecure and more comfortable as characters than in their own skin but that would make you all scroll down to the end!  Bloody actors trying to understand themselves again!  It’s blindingly obvious that we crave the applause as some kind of validation for our life choice and have a peculiar childhood bond with the dressing-up box.


Freudian problems aside, I am rubbish at making speeches.  I talk at 100mph, gabbling like a toddler on amphetamines, I physically shake and I will probably be unable to see over whatever lectern or stand they give me, thus losing any gravitas or authority.  Should I open with a joke about an actress and a bishop to endear myself or should I give a parental lecture about the effects of alcohol and promiscuous sex?  I could go for the tough love approach and start with that classic line “99% of actors are out of work at one time,” which will have them reaching for razor blades or maybe “if you are prepared to sell your soul, morals and dignity you could be Jesus/Maria/Joseph.”


I could use the old trick and imagine my audience all naked but I feel like that’s just a bit pervy or I could watch endless footage of Martin Luther King or Hitler for tips on capturing a crowd.  I could take some tips from politicians when speech-making; use staccato arm gestures and big pauses between points.  Or perhaps I could auto-tune my voice and speak-sing it to a beat box track a la Clegg?


No, I want people to take me seriously.


Looks like I will have to rely on being myself.  These students may have a greater photo opportunity with Michael Ball or Beppe for their Facebook page but I hope I can impart a bit of realism.  I believe that the majority of these students will work as actors but few will reach the dizzy heights of stardom so to hear how I survive as a jobbing actress might be of some value.


So I just need to take a deep breath and natter away like I would to you guys, if not, I’ll down a bottle of plonk and then there’ll be 76 pissed actors in the room!
Posted by Daniella at 21:07