It is a truth universally acknowledged that a single actress in possession of her audition folder must be in want of a treat!

I am heartily disappointed in Starbucks.  Not as part of an anti-commercialism vendetta, I love to support a local business but I don’t pretend you won’t see me in a Nero or Costa.  The reason for my annoyance with Starbucks and Co is that they, like many other eateries, have now put the calorie content on the signs next to their treats.


So I now know that my favourite Chocolate Chunk Shortbread is a calorific 497 calories with a heart-clogging 18g of fat – it is only the size of my hand and yet it constitutes a whole meal and a half with enough fat to insulate a small bear through winter.  I wish I didn’t know the full horrors of the shortbread because that biscuit was my audition treat and now I have to think twice before I part with my £1.75.


Audition treat, I hear you ask?

It is a truth universally acknowledged that a single actress in possession of her audition folder must be in want of a treat.

A post-audition treat to be precise; I’m sorry Ms Austen for bastardising your wonderful words but I’m sure even you would crave some sugary satisfaction after a particularly hard meeting with an editor!


For some strange reason I feel obligated to reward myself after an audition as if the two minutes of singing to strangers is enough cardio to warrant it!  I like to think that it's a reward for the whole process – from the phone call from your agent, to the frantic hunt for sheet music, maybe a trip to Chappells to buy a £25 compilation just to use one song, the early rising for vocal warm ups in the shower, the anxiety that lives with you all day until the 4.45pm call time to the final two minutes of screeching inappropriately to a panel who are mentally already on their trains home.  Phew!  You see a reward is clearly needed.


I am not the only one on this reward scheme; so many female friends do similar things.  Starbucks is a habitual recurrence in their admissions perhaps because there literally is one of every corner especially near London rehearsal rooms.  One drama school colleague goes for the cinnamon swirl, another prefers a chocolate muffin.  A dear friend of mine went to an open audition for The Lord of The Rings musical and after queueing since dawn and managing to sing 16 bars of Meadowlark in a different key to the one played by the accompanist she ended up in Haagen Daz in Leicester Square.  Whilst weeping to her Mum down the phone she nursed an ice-cream sundae, her reward for getting through such a trauma until one of those pesky Leicester Square pick-pockets, a pigeon, came and swiped it.  Obviously the weeping became wailing and a bad day became worse, the pigeon had denied her the one good thing about her day!


This post was prompted by a conversation whilst rehearsing The Last Five Years that opens tonight.  My character Cathy has a song called “Climbing Uphill” where we see her audition disasters recounted over dinner with her Dad.  I suggested that she may have some kind of junk food because after a bad audition ALL actresses eat rubbish; this observation was met with confusion by the others!  But they trusted me (probably because of my 11 years worth of experience of bad auditions and chubby thighs!) and we now have Cathy munching a McDonalds whilst singing about going to the gym.  This does seem to be a predominantly female reward scheme, when I have mentioned this to other male theatre friends they look at me incredulously.  “No,” they reply with confusion, “well, I suppose I do go and have a pint.” Ah ha! We all do it but in the “Men are from Mars, Woman are from Venus” way!


This behaviour may worry nutritionists and is probably classified as emotional comfort-eating.  There are countless articles and books about how to stop emotional eating and the dangers to your health and well-being.  I read a scary article on this subject titled “You’re not a dog, so don’t act like one.”  This kind of reward eating is like drooling for a bone but it also harks back to childhood routines (what kind of psychotherapy doesn’t?!) where we were given treats if we were quiet/tidied our room/did well at school.  So perhaps the answer isn’t switching my Starbucks for fruit or nuts but in fact re-training my brain to think I actually don’t require a reward for doing my job! 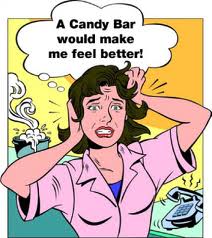 I personally have to curb this kind of behaviour not only because my metabolism is now over 30 years old and therefore on shut down, but mainly because what if I suddenly have 5 auditions in one week?

The anxiety + 2485 Starbucks calories = one week nearer to being air-lifted out of my house by crane on one of those daytime programmes.
Actually, who am I kidding, what actor or actress has 5 auditions a week nowadays?  Sadly in today’s climate we are more likely to get 5 every 6 months so with my brain re-training and this lull in auditions I may finally be able to kick the habit.


So as I go into ‘tr-eating’ rehab the only person who will suffer is Mr Starbucks; without us emotional eating actors you’ll only have the yummy mummy’s for your profit margins and they’re always on diets!
In case you want to read that scary article, here it is http://www.limitless365.com/2012/08/27/youre-not-a-dog-so-why-act-like-one-food-as-a-reward/
Posted by Daniella at 11:49