I just can't get you out of my head! 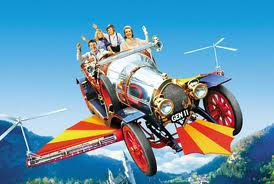 I was recently battling through the London Underground during rush hour half asleep but wholly agitated.  As I waded through the stone-faced commuters I found myself singing “Chitty Chitty Bang Bang” in my head – it came from nowhere and I managed the whole song before exiting the turnstile.


It was only when listening to a programme on Radio 4 by Shaun Keaveny (Granny Dani has a new favourite thing, I’m now too old even for Radio 2!) that I realised that this Chitty incident was actually an attack of a well-known affliction.
Earworms.


The word conjures up both comedy and gross images and it made me chuckle.  Now you know me, I love learning something new, so I got straight onto Google and found out..........that I was the last to know about this ailment.
Good ol’ Wikipedia defines an earworm as “a piece of music that sticks in one's mind so that one seems to hear it, even when it is not being played.......a type of song that typically has a high, upbeat melody and repetitive lyrics that verge between catchy and annoying.”

Radio 6 Music presenter Shaun Keaveny has been collecting his listeners’ earworms for three years and has now teamed up with a psychologist and Goldsmiths University to try “unearth” (ha-ha) why people become infected and which songs may be the most “earwormy.”  The Radio 4 programme was fascinating; explaining the high risk situations when these worms can attack such as when we’re doing boring, repetitive activities, early or late in the day or when we are stressed.  I love the idea of a song worming away through your head and what that reveals about your subconscious.
Without going into too much detail of my medical history, I have found that I seem to suffer from these earworm invasions when I am stressed (see above; in rush hour) or as Frank Sinatra would say, “in the wee small hours.”  I am sure this is common; who hasn’t lain in bed all snuggled up only to find an earworm snuggling up in your brain and gnawing away at your sanity.
My most random experience has to be when I had to have a brain scan:  I found myself in a backless hospital gown being reversed into the long white cylinder and told to “relax” which I can assure you is impossible when you people are peering into your brain.  Well, for some strange reason as I attempted to “relax” and focus on every yoga class I’d ever attended these words entered my head:  “Is it worth a-waiting for, If we live till 84, All we ever get is gru-el.”  It was like a chant over and over again until (inwardly) I broke into the chorus “Food, Glorious, Food, Hot sausage and mustard.....”  Now, I’ve never been in Fagin’s gang nor had I recently watched the film Oliver! or auditioned for the show so why the f&*k was THAT song my earworm in the middle of a brain scan?  What must my reading have looked like?  I am surprised that the nurses didn’t wheel me straight down the corridor to the psychiatric unit or point me towards the nearest Actor’s Retirement Home.
For that occasion my earworm wasn’t annoying but some kind of subconscious safety mechanism.


According to research by James Kellaris, 98% of individuals experience earworms. Women and men experience them equally often, but earworms tend to last longer for women and irritate them more.  Apparently there are certain groups of people who are more vulnerable to an earworm attack and creative people who work with music are one of them, so as a female musical theatre performer, I instantly fall into the “more vulnerable to an outbreak” category.  Add into the mix that people who sing along with the radio or on their own are even more susceptible and I can only be a one-woman epidemic.  My boyfriend recently exclaimed as I danced around the kitchen “You sing ALL the time!”  I am oblivious to this although his point was proved when I visited my parents and heard my Dad constantly singing or rapping to himself and I found myself joining in or harmonizing from upstairs!  Perhaps it is a genetic or learnt condition?﻿﻿

Researchers at Goldsmith’s University investigated which songs were classic earworms and ABBA’s Waterloo was near the top.  I didn’t need a scientist to tell me that; after years of performing the Mamma Mia! megamix I would get the tube to Waterloo Station, see the sign, and start singing that song again on a loop until the early hours.  As if an 8 show week wasn’t enough!
The words “affliction,”“infected” and “contagious” sound rather dramatic and don’t help with their image but supposedly these earworms are harmless and won’t do us any damage but try telling me that when you have the 2nd alto line of Mmm Bop! in your brain at 4am; you certainly feel like reaching for a brown paper bag or phoning the NHS helpline then!
So if a scientist was to study me and my earworms would they conclude that I reach to childhood songs in times of stress to remember an innocent, stress-free time or do I simply yearn to live in a musical?  Either way I’m going to embrace my earworms, welcome them in and perhaps dance along in the kitchen to the dismay of my boyfriend.  It seems the healthy option!
All together now.....”Oh you Chitty Chitty Bang Bang, pretty Chitty Bang Bang we love you!”
Posted by Daniella at 17:23