Ladies and Gentlemen please take your seats for the second act.....

I have a new affection for Ben Affleck.  An "Afflection" if you will!
The BAFTA’s on Sunday had some well-crafted speeches by mask winners; notably from Tessa Ross of Film 4 and Daniel Day Lewis who self-deprecatingly referred to his Stanislavski methods of “staying in character as myself for 55 years” and having small BAFTA sets around his home should he ever win this award.  Others went down less well, Anne Hathaway citing her laryngitis as the only reason why she didn’t sing her acceptance speech; thank goodness, please leave the through-singing on set, love!  But the speech that struck a chord with me was actor/producer/director Ben Affleck on winning Best Director for 'Argo.'


“This has been a second act for me and you’ve given me that, the industry has given me that and I want to thank you and I’m so grateful and proud and I dedicate this to anyone else out there trying to get their second act.” 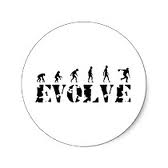 Well, thank you Ben, because I feel like that dedication was sent straight out of my TV last night to inspire me to send off yet another writing job application this morning.  Second Act soon became a #hashtag# all over Twitter and I love this theatrical turn of phrase to explain trying to reinvent ourselves.  A “second act” in life seems like the acting version of Darwin’s theories as we evolve to cope in our habitat.
He interestingly called it a “second act” not a “second chance.”  This implies person developing through choice not having to change as a result of failure.  Mr Affleck has obviously succeeded very well in his first act as an actor and continues to do so, but he clearly felt that he had more to give and wanted to challenge himself.
There are very few people in the world who remain in their first acts forever; because people change and develop throughout their lives it would be quite dull and even stifling if we stayed as we were in the same routine with the same challenges.  I watched a television programmes years ago where they interviewed an elderly Chinese man who was a fisherman.  He spoke eloquently about his craft but when he was asked if he had followed into a family business he shook his head and said he had previously been an architect and that everyone should have at least one job change in their lives.  I must have been hankering for a career change myself even back then if I can still remember that fisherman so clearly.


“Life is like a stage, and all the men and women merely players”


If Shakespeare was right and our lives truly do reflect art then the universal structure of a play resonates with Ben Affleck’s chosen phrase. 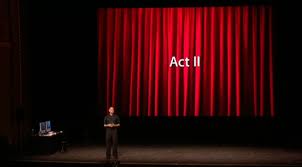 Why would you want to stay as a fledgling in your set-up or rush to your resolution?  Your second act is meant to be a challenge where you turn things on their head and take risks.  It is the meaty part of the play that will ultimately affect the resolution.  I’m sure the actor, Ben Affleck, in Act 1 didn’t dream that he would stack up directing awards and perhaps be remembered for these accolades in his resolution instead of acting.  My dream resolution of retiring in an Italian vineyard whilst writing memoirs like an English Nora Ephron won’t come into being if I stay as a jobbing actress who will only be able to retire on a bottle of Blossom Hill in my sister’s annexe!
Reinventing yourself and changing careers has almost become trendy.  Think of all of the city folk you read about in magazines who wake up one day and realise they cannot stand the rat-race anymore and retrain as a yoga teacher.  They look all calm and smiley in the pictures not grey and harassed on a commuter train!  Footballers become coaches or pundits, mothers start their own businesses and actors become agents or teachers; people are constantly developing and evolving. 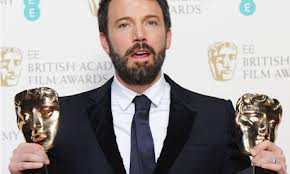 So well done Ben Affleck; I applaud you and 'Argo’s BAFTA success, I applaud that fact that we don’t see you in gossip mags everyday and most of all, I applaud you for inspiring folk like me who are trying to get to their second act.
(This post was originally written for The Huffington Post)
Posted by Daniella at 14:35