The Hills are Alive with The Sound of Nostalgia

Thoughtful gifts are the best presents and sometimes being in the presence of your favourite people is the best gift of all.
This week the Family Gibb surprised me with an early birthday present – a trip to watch The Sound of Music at Regent’s Park Open Air Theatre.  Watching open air theatre in the summer is a must-do in my book and I was thrilled to have a chance to go to that beautiful venue again.
There are two reasons why this gift was so thoughtful; the fact that it was just us 4 who went and that it is such a significant show.  As adults, it’s very rare that you get to hang out with your mum, dad and sibling like you did 25 years ago.  You take it for granted when you’re stuck in a car together or eating roast dinner but as we get older and mainly meet up for big family events, the 4 becomes 8, then 10 etc so it was lovely to be the Family Gibb for an evening.  It was also thoughtful because The Sound of Music was the first show I ever performed in at 8 years old and because of it, I became hell-bent on becoming an actress.
When I was 8, my Mum dressed me in a sailor dress, plaited my hair and sent me in for a group audition for a local production of The Sound of Music.  I know what you’re thinking - “crazy stage mum, pushing the girl squeezed into a sailor’s dress like a mini Judy Garland” but no, she really wasn’t.  My Mum is just someone who does everything in life 100% and has a heart of gold.  After 4 months of rehearsals and 6 precious shows as Gretl, the youngest of the Von Trapp children, I had had the time of my life and felt bereft that it was over.  In fact, the grief was so acute that I was to be found in my parents’ downstairs toilet for a week afterwards, wailing at the loss of my ‘show family.’  (The over-dramatic personality was cultivated from a young age!) I even went so far as to telephone the poor boy who had played Frederich to tell him that I missed him.  He was 13 years old and probably mortified to have a snivelling 8 year old phone his house, poor bloke!


As with all grieving processes, I went through phases.  The first was the crying in the downstairs loo, next came the “replacement” phase.  I made my younger sister and our two best friends play ‘The Von Trapps’ with me – lining them up in my friend’s lounge and forcing them to march up and down whilst telling them that I knew how to do it best because I had been in the show.  (The self-absorbed know-all was also cultivated early on, vile!)  I’m surprised they didn’t whack me over my head with a ‘Yodel ay ee ooo’ and head off to play Sonic the Hedgehog.  Becca, Andrew and Caroline – I am so sorry!
The next phase was “Moving On” or ‘onwards and upwards’ as my agent always says!  I had felt the lights on my face and was hungry for more.  And as the saying goes –

life was never the same again.


So this show was special to the young, bossy girl with West End aspirations and I had forgotten it until the wonderful performance at the park this week.  The children were amazing (yes, much better than 8 year old me) and it was lovely to see some performing friends excel themselves on the stage.  My sister wept from first entrance, justifiably I feel, because the nun’s singing was exquisite (although maybe she was just re-living the lounge marching debacle) and by the interval the whole Family Gibb were in floods.  I can’t blame my emotional side on being an actress, it is clearly genetics!

I love new musical theatre, new writing and funky Jason Robert Brown tunes but there is something about traditional musical theatre that makes my heart sing.  Maybe it because those were the songs I heard in my childhood that inspired me to start a career or maybe because they were written so damn well.  The lyrics of Rodgers & Hammerstein are simple and yet packed with a universal meaning that cuts through to us all.  The melodies stay in your head much longer than the average ‘show hit’ today and The Sound of Music is just a beautiful show.


I urge you to go and see it and if not, dust off your old ‘Best of the Musicals’ CD and have a sing along with Marti Webb and Dave Willets.  Sometimes it’s good to re-visit your roots as a reminder for how you ended up here or to re-focus where you want to be. 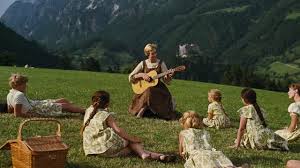 The secret to a happy evening might just be to remember your favourite things – it turns out mine are family and singing nuns!
All together now......