I went to see a hugely successful and long running show yesterday – The Lion King. Last year it was announced that it had grossed more money through ticket sales (not counting merchandise or the film revenue) than any other stage show or film release. I had seen it a decade ago when a fellow drama student gave her magnificent debut but I hadn’t been back since. However being blessed with a theatre-loving, confident little 4 year old nephew, I felt now was the time to take him on his first trip to the West End. Until ‘Cars’ or ‘Planes 2’ the musical opens in town, The Lion King was the obvious choice. And it did not disappoint. 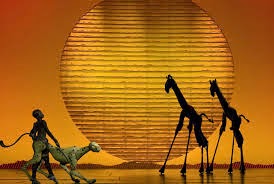 Seeing theatre through a child’s eyes filled me with magic and awe. But the presence of this show is such that I think I would have been just as tearful had I been sat there alone. This show has been running for 15 years in London and it still amazes. The set and design are just faultless and the skill and energy of the ensemble performers are sublime. I thought I'd done well to master how to work Trekkie Monster and my Bad Idea Bear in Avenue Q until I saw a man on 4 stilts as a giraffe!

My neph and I gasped as the elephant walked past us and cowered as the hyenas sang. I’m sorry but no matter how advanced technology gets, no 3D movie can have the same effect as a live performance.

The irony of attending a Sunday matinee wasn’t lost on me after airing my views on the matter last year. However, it was a packed house and the performers didn’t appear to be dreaming of roast dinners with family instead, they were fully focused and awe-inspiring.  When you are a performer in a long-running show you can be forgiven for having the odd jaded day, it is tough to do the same thing 8 shows a week with the same intensity. So I just want to say thank you to them and should they ever have an “I’m knackered, it’s Sunday, why am I dressed as a bloomin’ bird” feeling, let them know that audiences REALLY appreciate their work.

It’s easy as a performer to forget that the mass of eyes in the darkness are individual people; folk who’ve saved up all year for a ticket (seriously Disney £70 a ticket?) couples on a first date or a proud auntie with her much-adored nephew. If you are playing to a 1000seater house then you are making that many people happy. How great is that? So thank you to all of them, and especially to my barricades pal Andy Mace for organising the tickets, you all made our day.

My enjoyment as an audience member held more poignancy today; I have seen more productions than appeared in them in recent months and my decision making process of ‘what the heck to do next’ has come to a head. That’s hard for a performer to say, whether you’re a jobbing actress or not. It cuts away at the part of you that defines who you are or who you have been. Wow, I feel like I’m at a cyber actors anonymous meeting, but you catch my drift.

I loved watching the skill of The Lion King cast and being able to experience my precious nephew’s reactions to it. But did I enjoy that more than I do performing myself? My heart misses it terribly but if I was sat waiting for the phone to ring then I wouldn’t be able afford such precious days as yesterday with my family (once again, seriously £70 a ticket?)

The Circle of Life is one of the most rousing songs in the musical with a clear message – maybe moments in one’s life are transient. Maybe we can’t have the same career forever and you get caught up in the circle of life that includes responsibility and bills. Or is that an excuse – am I missing out on my place in the world by being scared of this blip and not holding on fast? Surely, all the happiness guides in the world say follow your heart but I have to be honest and tell you, that I don’t know what my heart wants. And that is scarier than a hyena running past you in the theatre. I need Rafiki to come and knock me on the head and give me the answer....... 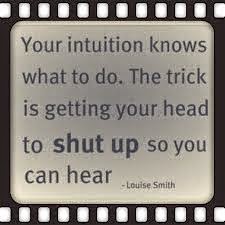