Bums on seats for Mr Foote's Other Leg

Visiting the Theatre Royal Haymarket last week was a very proud moment for me. I was meeting my dear friend Laura Toots** who is making her play debut there in Mr Foote’s Other Leg. You may remember dear Toots as my accomplice in Henna Night years ago, a play we co-produced with dreams of broadening our careers beyond musical theatre. WELL, SHE DID IT! Her play debut wasn’t a regional tour or fringe event, no dear Toots doesn’t mess around with starting small, it is at the bloomin’ poshest theatre in London’s celebrated West End! Proud doesn’t even come close, she’s so brilliant. 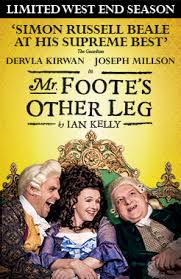 AND it’s a fantastic play. Well, it stars Simon Russell Beale and anything that man touches can’t fail to be fantastic. It is based on a real man, Samuel Foote, a one-legged transvestite and comedy actor. The play is saturated with fast-paced wit and bawdy fun but with some genuinely touching moments.  Foote was a fascinating man and I can’t believe I hadn’t heard of him before so thank you to the writer (and actor in the cast) Ian Kelly for bringing him to our attention in such a successful way. I’m not sure the tourists sat next to me with their two children under the age of 12 agreed as the first scene commenced with some ‘fucks’ and ‘cocks in jars!’ but trust me it’s great.

I was surprised to see the upper balcony closed on a Saturday night and saddened by the interval when I was realised what a gem of a play London’s theatre audiences were missing out on. I’m sure they were all jammed into some budget-busting musical but more fool them for not seeing this before boarding their planes home. 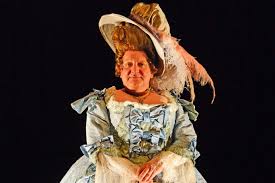 If you are an aspiring actor, drama student or just a simple theatre lover then why oh why aren’t you knocking down the doors of The Haymarket to see Simon Russell Beale live onstage? He is one of the country’s most gifted actors, (arguably the finest) with such natural delivery and impeccable technique to make throw away comments reach the back of the dress circle. Dressed in full 18th frockage, he manages to make you well up with empathy and then p*ss your pants a moment later.

Writer Ian Kelly calls his play ‘a love letter to theatre’ – full of the characters that will forever appear in the life of such beautiful buildings. You cannot help but laugh knowingly as the stage manageress laments her life washing actors’ socks and backstage dressing-room chat behind the scenes. But this play is not just peppered with in-jokes for actory folk; it celebrates the will to perform and write plays that deserve to seen, the role that theatre plays in society and that unnameable quality that defines a performer.

In short, get yourself a ticket. It will be a great Christmas pressie, a way to spend time with a loved one and the show is so wonderful that you will thank me for it! Trust me, I’m an actor.

**Toots is not her real, or even Spotlight, name but an endearing nickname inspired by a superb Trombone impression in her repertoire!
Posted by Daniella at 23:27