I’m attempting a year of positivity after a slightly below par 2015. Don’t worry this isn’t one of those new year resolution blogs which I’ll be giving up by mid February, (bleurgh!) A dear friend told me that rather than resolutions I should have goals. And not just general twaddle like ‘lose weight’, ‘run more’ but make them specific and be held accountable by someone so you have to explain how you’re doing or face the naughty step if you haven’t! I liked this idea of being productive and having a plan.

So when I read an article by Magdalena Bak-Maier mapping out a productivity plan it only strengthened my resolve. For January, she advised to find supportive role models – well I’ve been mulling this over, my afore-mentioned mate is definitely one, but I also started ruminating about dream role models. Kind of like the ‘dinner party guest game’ but with an inspirational twist!

o   Imelda Staunton in a rehearsal room
What performer hasn’t marvelled at this lady’s talent since her commanding performance in Gypsy? I admire her for her talent, her enduring marriage to the equally cool Carson and for her ability to just be magnetic in every performance she gives whether on stage or screen. But my main reason for having her as a dream role model is because she’s short; she would give me confidence as a small actress. I was once told by a director that it was a shame I was so short because I’d never play a lead. Now, the real reason may have more to do with my lack of star quality talent but the fact that I took it to heart must have had something to do with my lack of belief in my ability to succeed. I used it as an excuse when explaining away lost auditions but even to myself before I went in. Now all the positive thinking books in the world will tell you that your beliefs can shape who you are and what happens to you. So Imelda and I would hang out in a rehearsal room, chatting through scripts being small and fabulous! 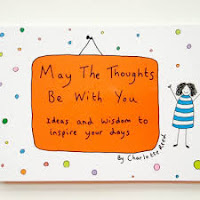 I discovered Charlotte Reed via Facebook; she started drawing images to help her get through depression and as they helped her she began to realise that they could help others. She has a stall at Portobello Market and has released a book called May The Thoughts BeWith You. Her quirky drawings are full of energy and positivity. Their message is succinct and straight to the point; they achieve the same reaction as a long-winded article. They are colourful and a couple now adorn my bedroom wall. You don’t need to have suffered from a similar illness to reap the benefits from her work. Having a walk outside with this dream role model would get me out of a dull mood and make me see the brighter side of life.

o   My Grandad in armchairs with a cup of tea and biscuits
This man is a real role model and very much alive and kicking so I’m cheating the brief rather. But he’s special so I don’t care. My Pop has taught me hundreds of things including how to play snap and that there’s no such thing as a kipper but as an adult I’ve begun to see the real lessons - Family comes first, they will always be there to support and catch you. A close family is the ultimate safety net; a person’s eyes tell you the truth; a relationship is based on compatibility and the secret to a 60 year marriage is each person thinking they’re getting the best end of the deal.  I wear my heart on my sleeve far too much, I’d tell the postman about my latest drama, but his reserve shows me that there is a dignity to keeping something back. But his ultimate lesson is the power of the mind; you can do and survive anything if you put your mind to it, it is a powerful tool. And that is why my Pop is one of my ultimate role models.

o   Antony Sher sipping a GnT by the River Avon

Another actor – but this man’s passion for his craft is why he made the list. His published diaries are full of his creativity when preparing for a role; he uses art, research and truly submerges himself. I envy this ability to live and breathe acting plus his obvious talent. The way he writes about his life with his partner, Gregory Doran, in their second home near the RSC makes me want to sit with them by the river sipping gin. I imagine we’d have gossipy chats peppered with Shakespearean debates and maybe, just maybe, some of his passion would rub off on me.

So that’s my current four, I’m sure I’ll think of plenty more just like we do with the dinner party game! I have found this quite nice to think about. It’s obviously working as this is the first time I’ve felt moved to write in a few weeks, plus the sun was out today so positive 2016 is going alright!