Hasn't he done well? Edward Harrison at The Rose

There’s an old adage that actors are competitive – they don’t like to see each other do well and are only bitterly thinking about their own failures when they say “well done on winning your Olivier Award dear,” through gritted teeth. (Think All About Eve or Showgirls.) Well that’s utter tripe.

Most actors you meet are genuinely thrilled when a pal gets a super job; they understand all the years of graft, self doubt and physical theatre classes at drama school that they have endured and so are bouncing off the walls and speedily booking tickets when a job comes off.

Someone from my old world who is doing jolly well is a lovely man called Ed. Edward Harrison. (check out his website here) We met years ago; him a LIPA graduate and I hailing from down south via GSA; there was no Anchorman style drama school rumble we had a mutual friend in the gorgeous Owain Rhys Davies and used to hang out sometimes. He’s done some amazing jobs and even achieved the holy grail of working in New York; (I’m not jealous I’m not jealous I said to myself even when I heard it was twice!) firstly with Kenneth Branagh in Macbeth and latterly in the critically acclaimed version of Hilary Mantel’s Wolf Hall. Ed continues to be a successful working actor and is currently appearing in The Rose Theatre, Kingston’s production of All My Sons by Arthur Miller.

I love Arthur Miller’s plays and am off to see the show next week so I had a little chat with him about it.

It's very exciting to be part of the first Miller play ever produced here! (The Rose).....It's such a powerful, intricate play....a bedrock. All Miller's play's are layered and complex and so the detective work with regard to what the character is thinking and revealing has been fascinating.

With our director, Michael Rudman, we've found a state of repression and control - so you're watching these people trying to keep the lid on for whatever reason. It's tricky, but rewarding when it really cooks.

The last play I saw at The Rose was thoroughly modern; will Arthur Miller have the same pull? I personally think that all good drama is consistently relevant and I can’t help thinking that the American Dream themes of Miller continue to echo as November 8th draws near. Ed agrees... 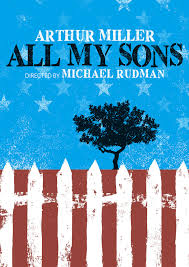 He writes about people in love, in crisis, in search of truth, or peace - universal and timeless - that's why he is brilliant. All My Sons is about many things; namely family, courage, truth and deceit. There was an obsession with money and business in America at the time and you can draw real parallels about what that does to good people and where any sense of morality fits in all that.

What’s lovely about Ed is that he’s reached the stage in his career where he is able to balance it with real life; he’s engaged, passionate about pursuing his craft and yet still in touch with many of his LIPA crowd whether they’re still involved in the industry or not. It’s bloody lovely to hear about his well-deserved success and you can see him at The Rose, or maybe grabbing tea in the Wagamama's next door, from November 2nd - November 19th. Ticket details are here.
Posted by Daniella at 22:53