This week I have bought my Christmas tree from a farm and decorated it whilst watching Love Actually so my festive levels are soaring nicely. I feel like we have all been waiting for December, desperate for a reason to feel utterly joyful and to spread some love around after the onslaught of the previous 11 months.

Last year the Christmas offering at The Rose Theatre, Kingston brought me out of a bleak hole, rather like Moley, and so I was looking forward to topping up my festive levels with their new production of Wind in the Willows. The Rose has had a knockout year; Hollywood directors, high class productions and promises of more to come. 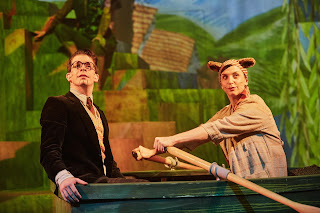 After the hustle and bustle of Kingston’s markets the pastoral scene that greets you on entering the auditorium is a welcome respite. Once again, the use of projection aids the creation of a make believe world on their versatile stage with a babbling brook and luscious green amid a light jazz soundtrack - despite devouring a Wagamama’s 30 minutes before I could almost taste the hot buttered toast!

The adaptation of Kenneth Grahame’s classic by Ciaran McConville has the Disney/Pixar factor; witty, fast paced and with winks to the adults too. The children squealed at the falling snow and Poop Poop (well, I did too actually – I don’t want to ruin it for you but the song is utter genius) whilst the adults enjoyed the dangers of ‘impromtu affairs’ and a tribute to Titanic. Lovely work Mr McConville!

The costume designs by Peter Todd have inspired me to dress like a rabbit in 2017; he made a beautiful job of suggesting animal characteristics via 1940s Britain, seriously, you may well see me sporting a floral tea dress teamed with an eared hat! The whole design is understated and gorgeous and pulls you into this gentle tale of friendship and loyalty.

I was happy to see my old GSA friend, Mike Taibi in the cast stealing the show with his versatility as a baddie, an old nag (see I knew all that time in War Horse would pay off,) and a cameo as Lady Austin that leaves you wondering why you need to go see any other Christmas show to see a dame. The Youth Theatre are astoundingly talented and match up to the touching performances of the adult cast. The physical work is particularly impressive.

I don’t need a Facebook “review of the year” to tell me about my 2016; moments in this production did that for me. My whole year was there; the idea of coming out from underground to find an adventure, realising the value of home, seeing Mr Badger welcomed into the arms of Mrs Badger who has been waiting for him and meeting someone that makes you smell orange blossom water, the scent of a friendship that will last forever. All of life is found in this tale, that’s why it’s a classic. These are the qualities people are craving at the end of 2016; no need for big presents just grab someone you love and have a “just in case” picnic.

This year, of all the years, we need reassurance that there is good in the world and a reminder of the key values needed for survival; friendship, love and the appreciation for the simple things in life. This production of Wind in the Willows has them in abundance and I promise you that you’ll leave the theatre hopeful of a happier 2017 (and with a memory of the gorgeous Mike Taibi in heels!)

Wind in the Willows is playing at The Rose Theatre, Kingston until January 3rd 2017, get tickets here.
Posted by Daniella at 23:34