My previous experience touring in a musical was great but not particularly realistic; it was international so we were placed in hotels and given per diems (pocket money) every week which I mostly spent in various European chains of H&M and Zara.   A sheltered and spoon-fed existence!  So to encounter the turbulent reality of UK touring at the ripe old age of 30 has been a slight shock.  Kind of like some “Sloaney pony” thinking she’s livin’ it large at Glastonbury in the VIP tent only to be thrown into the muddy mosh pit!


You are required to find “digs” for each venue on the tour list as commuting from my house to Nottingham/Aberdeen/Plymouth isn’t a feasible option.  You are emailed countless packs from various stage door keepers around the country listing kind souls who would happily house a travelling player in their vacant back bedroom for a nominal fee.  The requests or rules on each advert are often both amusing and disconcerting;  “Use of the garden if pre arranged” “kitchen use only for snacks” or “must like cats/spiders/snakes.”
Some of these people proudly list their connections to the industry and therefore “understand our ways” as if actors are not dissimilar to indigenous tribe people from some far flung land.  But beware these sympathetic souls; these are the people who will keep you standing on the landing showing you photos of their jaunts in Am Dram in 1967 or even worse, dissect your performance over toast after you have got them free tickets for your show.  In an ideal world, I would have a self-contained flat each week where I could eat home cooked vegetables instead of living off microwavable broccoli for days.  The Marks and Spencer’s Food Hall is a direct beneficiary of touring actors and their wages; we fool ourselves into believing we are still having some kind of nutrients by “nuking” food in plastic!
But back to the sleeping arrangements!  Sometimes you can hit the jackpot with a landlady who cooks you dinner or has a Jacuzzi in the bathroom but more often than not, you arrive at some decaying hovel and count down the days till Saturday.  You can spot those cast members because their dressing rooms become bedrooms with all their possessions strewn about and they walk dripping from the work shower cubicle clutching a wash bag!
In Bath I had splashed out on a B&B to make the most of a cooked breakfast and a high level of hygiene!  All seemed well until I was having an “actory” lie in after a late show and there was a bang on door....”Yes?” I croaked as I peered round the door to hide my pjs, “The cleaner is waiting to do your room,” replied the matronly landlady.  I peered further around the door to see a small eastern lady clutching a duster.  “I don’t mind if my room isn’t cleaned today,” I explained “it’s just me and I have plenty of towels,” “But you need to be out of the room by 10am” she retorted, I was confused I wasn’t checking out until Saturday so I just frowned “this is the rule in all bed and breakfasts” and thus you found me unshowered and in Cafe Nero every morning until I was allowed back for an afternoon snooze.
I lay in bed in the same B&B relaxing after a two show day; scented candle burning, 245 pages into a piece of historical fiction then BBRRRRRRRIIIIIIIIIIIIIIIIIIIIIIIING!  The fire alarm was going off and continued to do so for over 1 hour and 45 minutes.  It turns out I was the only guest so Matron Landlady and I climbed up ladders trying to prise the six offending appliances from the ceiling but to no avail.  She went back downstairs muttering that she didn’t know anyone who would be awake to help at 1am leaving me and my ringing ears alone.  I couldn’t take it anymore and so I followed my school advice and phoned 999.  Ten minutes later three fire engines lit up the street and I greeted a troop of Firemen in my pjs!  They rectified the problem and also chastised the landlady for putting her sole guest in potential peril.  But I did get one night taken off my bill!
In another city I was housed in a converted garage with decor that wouldn’t look out of place on the set of Anchorman. But I could bear it for five days until I looked out of the window and saw this 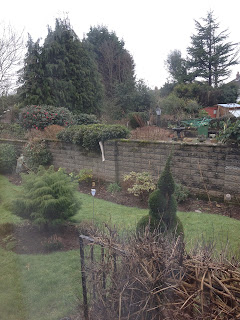 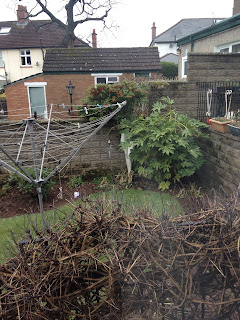 And this...........
I also found an arm coming out of a bush and hand with red painted nails in a flower bed, but I never did find the mannequins head.  I am all for personal taste and expression but Aaaaaaaargh!


AlI need is a bed and a roof over my head for a few nights, Jesus was happy in a stable for goodness sakes so why should I be picky?  Maybe I will relax my penthouse expectations but I fear the next 19 weeks around the country will only bring more toe curling experiences and you lucky readers shall experience them all with me!
Posted by Daniella at 23:26