Is this for Rhyl?

There is something unsettling and downright spooky about an out-of-season seaside town.  The beach is deserted and the wind slams signs against empty shops waiting for the tourists to return.  It is a sad scene; and no more so than for a travelling actor, for I have just spent a week in Rhyl, North Wales.


My boyfriend tells me that it was a holiday destination for Mancunian and Brummy families and he spent time there as a child, so I was expecting a Northern version of Margate or Bognor.  Rhyl was an empty resort with a derelict fairground and few people under the age of 50.  But there I was; my Cafe Nero hadn’t been stamped in days and I was hanging out of my dressing room window in a desperate attempt to get signal on my mobile.
To be fair, as I dangled vicariously out of the window, the view was beautiful.  A deserted beach can also be breathtaking and soothing.  Walking and running along the windy coastline was the perfect antidote to the bargain stores and scary looking locals. 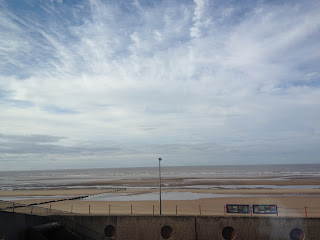 And then there was the wildlife.  One of the cast made an announcement after warm-up before a midweek show.  “Just to warn you guys I was attacked this morning.”  Cue gasps of shock and support for poor Jonny, we had just got used to the leisure centre theatre and the lack of eateries and now we had to worry about crime too?  “It happened outside of McDonalds,” (cue more gasps at his blatant admission of eating saturated fat ridden meat patties, wasn’t this boy a dancer?!!)
It transpired that after a buying a small hamburger Jonny had unwrapped it, took a bite and headed towards The Promenade.  But before he could consume a second bite a seagull swooped down and swiped it; smashing Jonny’s face with its wing and biting his finger for good measure before zooming off with its swag.
Poor Jonny – bereft, hungry and violated.
An actor’s touring allowance doesn’t go very far so returning for seconds wasn’t an option.  Only then did Jonny see a sign on the McDonalds door stating “Do Not Unwrap Food Outside.  Beware Of The Seagulls.”  In London we are used to signs about pick pockets or unattended baggage not scavenging sea creatures.  Although traumatised, Jonny did find the courage to re-enact the event with gusto which brightened up an otherwise dull day at work!
Our lasting memories of Rhyl were slightly stressful.  It was the venue before a week-long holiday so, like the run up to Christmas, the days seemed longer than normal.  By the Saturday evening show we were all packed up and in holiday mode, only 2 hours stood between us and spring break!
Five minutes into Act 1 we heard a muffled boom and the stage went dark.  The bubble machine went crazy and suddenly we had been transported from Avenue Q to a 1990s disco.  A show stop ensued and the poor punters in Rhyl sat looking at the emergency safety curtain.  Almost an hour later, it was confirmed that we had tripped the whole system and only had front of house power.  My arrival home, after the 4 and a half hour drive, was edging into the dawn hours as we sat in the wings waiting to hear our fate.  But in true “show must go on” fashion our company planned to continue the performance with the two spotlights.  I felt like I was in a school show as we navigated each scene in various forms of darkness and we trudged to the finale before the midnight bell tolled!  Talk about prolonging a holiday! But we got there in the end and I was in the car and heading for the motorway.
Stoke on Trent beckons! 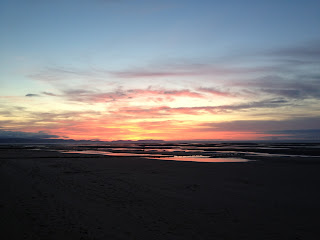