"The fog on the Tyne is all mine, all mine!"

Cheryl Cole and I finally have something in common; it’s not our long dark hair, nor the fact that I hail from Guildford where she allegedly clobbered a nightclub clerk and, no, HEAT magazine, she hasn’t suddenly ballooned to size 8, but I have been a Geordie lass for the last week.  Sadly, that is where the similarities between Cheryl and I end.  I could have chosen Jimmy Nail or Ant and Dec for that analogy but don’t judge a girl for wanting to be likened to Cheryl for a mere moment!

Avenue Q hit Newcastle-upon-Tyne last week and we all fell in love with the place.  Obviously the heat-wave may have helped brighten our mood and it can be argued that we would fall in love with any city in the 25 degree sunshine.  But the sun shone in Wolverhampton...............I rest my case!


I can be judgemental sometimes, a quality I am not proud of and knowing that Newcastle was known for the nightlife and partying, that was all I expected to find.  But lucky Granny Dani was greeted with grand Georgian architecture, castle keeps, cow-grazing on a Moor and beaches to visit!  I had a lot to do in 5 days in-between a horrific schedule of performances, (I keep forgetting the reason I get to visit all these places is the job, damn those pesky shows!) 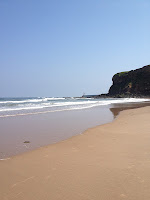 That’s not to say that there wasn’t a stag-do in sight; I witnessed my fair share of fancy-dress characters roaming the streets and it was rumoured a score of man-sized, nappy clad babies rolled into The Holiday Inn in the early hours of Saturday morning!  A more youthful pack of lads were great ambassadors for their city when they spied our Aussie Eve from the cast sunbathing at the glorious beach in Tynemouth (yes we had a tiring week!)  Their shouts of approval echoed around the bay, bouncing off of the cliff faces, to inform us she must be highly skilled in certain sexual acts because her bum looked so nice - lovely!

I ordered a taxi home and the text I received went thus – your vehicle, a white ford transit, is waiting outside, your driver’s name is shaun.  I peered out of the window to see Shaun sat in a huge white van, I wasn’t sure if I was being taken on a stag-do or illegally smuggled across the North Sea! 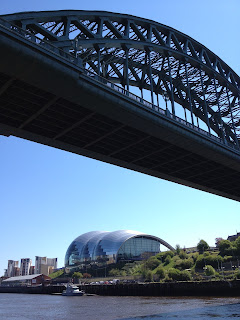 But back to the wonderful city I discovered, amid the great restaurants and St James’ Park are remnants of Hadrian’s Wall and the “new” castle built by the son of William the Conqueror.  The history geek inside me was doing somersaults!  I even surpassed myself reaching new levels of Nerd-Dom as I stood with my back to the drunken stags on the Quayside and admired the mechanics of the Millennium Bridge.  Spanning the River Tyne along from the iconic Tyne Bridge, the Millennium Bridge tilts to allow boats to pass and at the risk of sounding stupid, it was so cool!!  The pedestrian and cycle paths curve upwards like some kind of ride at Alton Towers and lower again as if nothing has happened.   I’ll be sat with my sandwiches alongside a canal, applauding the rise and fall of locks, next! 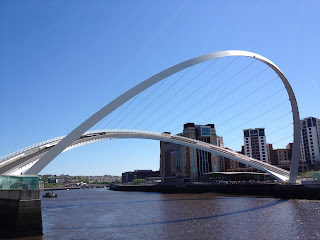 Despite doing so many performances at The Theatre Royal that left our voices cracking more than the paint in our dressing rooms, I had one of my favourite weeks on tour to date.  Sign me up to The Toon Army and pour me a Newcastle Brown Ale!  The moral of the tale is “don’t judge a book by its cover” or a city at least, you never know what gems you may find beyond the Walkabout Bars and Pound Lands.
So, next time you get offered a gig in Basingstoke, give it a go; you may discover a Roman fort or at least a large branch of Primark.  It is always fun to explore!
Posted by Daniella at 01:12