Avenue Q has 7 weeks left on the road; my shoulders are relieved, my bank manager is anxious and I am becoming nostalgic.  I have been re-visiting all of the cities we have seen in my mind and I think we will have experienced a fair cross-section of The British Isles in 6 months.


Back in April, whilst wandering around the beautiful city of Canterbury, I pondered over pilgrimages as I saw the shrine of St Thomas Becket in the cathedral.  Millions of people have journeyed to this site, the most notorious being the characters in Chaucer’s Canterbury Tales to see where the Archbishop was murdered in 1170 - travellers are on my mind again!  People are inclined to travel for various reasons; so, of course, my brain began to make comparisons with my own group of troubadours. 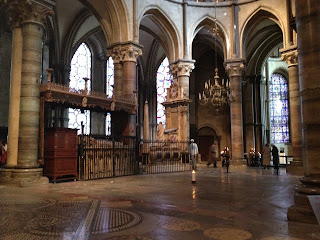 A pilgrimage is “a journey or search of moral or spiritual significance, typically to a location of importance to a person’s beliefs.”  So where should we actors head for?  Stratford-upon-Avon?  The BBC? Or maybe Greece to holiday where theatre first began, (that’s if the Euro holds out.)  Chaucer’s pilgrims told stories as they trudged from Southwark, across the South Downs, towards Canterbury; lusty tales of adultery, money and power – Chaucer obviously felt that everyone has a story worth sharing.

My current travelling companions hail from Japan, USA, Australia and the UK and we all, too, have histories and stories to tell.  Indeed, I choose to divulge mine here online.  It is “en vogue” to tweet, blog and ‘status update’ our stories nowadays; I would hardly call my blog here classic literature but perhaps tweeting our nightmare train journeys is the modern day equivalent to Chaucer’s roaming tales.  Young Gabby in the company is a wonderfully witty tweeter @GabbyBro, especially with her #dailylesson tweets, so I have cast her as our “Avenue Q Chaucer!”

“At night was come into that hostelry,


Well nine and twenty in a company


Of sundry folk of aventure ye-fall


In fellowship, and pilgrims were they all.”


“Rehearsing new cast of# avenuequktour at


In the “Eat, Pray, Love” generation, we often believe that escaping the humdrum of everyday life will help us find solutions to life’s problems.  After messy break-ups or crappy auditions I am sure that a month in an Indian ashram is the only answer, hoping that meditating and yoga at dawn will help heal the loneliness, insecurity and general self-loathing.  You could say that the middle-class youths rite of passage, the “gap year” is a pilgrimage of sorts; dealing with the inability to go to Uni or settle down until they have found themselves via fish-bowls in Bangkok or skinny dipping in Sri Lanka.
I don’t mean to be derogatory because travel can truly broaden the mind as you experience new cultures, food and ideas.  That can only be a good thing for the soul but sometimes you can find new things closer to home, as I try to prove weekly with my tourist guides to Swindon and Rhyl as I endeavour to see the best in places!  A friend once said to me that wherever you may go, you will still have the same issues and troubles because no amount of air-miles will make them disappear.  Therefore running away isn’t going to help; only standing still and dealing with stuff head on will sort you out and it also saves a fortune!


We, on the Avenue Q tour, all have our own reasons for our theatrical pilgrimage; ambition, a desire to escape normal life or just paying mortgage.  We may have wheely suitcases instead of the clothes on our backs and be seeing the South Downs through a South Eastern train window instead of on our knees like poor King Henry II, but perhaps our motive are similar; to pursue a personal goal.

I’m not sure if our journey has “a spiritual or moral significance” (I certainly found none of the above in Coventry,) but every journey and its participants deserves recording, whether it is online or in a leather-bound book.
Posted by Daniella at 16:27