When girls are little they have to make one major decision, not if Harry from One Direction would be a better boyfriend than Justin Bieber, but whether to do horse-riding or dancing. 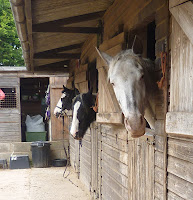 You cannot do both hobbies as a child; you only have so many free hours between SAT exams and getting on league tables and you parents need money left to actually eat, but mainly because each discipline trains your muscles in completely opposite ways.  Trust me; a girl I went to drama school with had spent her youth galloping and gymkhana-ing with great skill but her plie in ballet looked rather like she was squatting over a French toilet.


I chose dancing, as the cupboards of old leotards and tap shoes at my parents’ house will testify, but I sometimes have rued this decision.  You see, despite doing exciting things in my career I still have yet to fulfil one major dream – to be in a Period Drama.  And I always thought that if I was proficient on a pony then that might just tip it for a casting director.
Until a few years ago I had my heart set on becoming the next Elizabeth Bennett in Pride and Prejudice after the wonderful Jennifer Ehle, but since Keira Knightley kicked that pipe dream in the gutter, I have a new quest.....

To be in Downton Abbey.

I want to be in Downton Abbey, dear Mr Fellowes if you are reading!  I wasn’t born with the arched dark eyebrows for nothing.  I can look haughty and conceal how I am feeling behind emotive eyes; indeed, I am told that my grumpy morning self does this quite frequently!


I have even bought a dark green 1920s cloche hat, I have only worn it to vacuum my flat in so far but it is currently touring with me in my car, in case I should run into Mr Fellowes and he requires a visual aid to my suitability.  So I have the look, the hat and a fairly posh sounding voice but I am not sure if my curvy bum would suit the flapper style frocks. But at the rate at which Mr Fellowes’ scripts steam through the decades I could be cast just in time for the 1950s!


I know I am a female cliché to be drawn to period dramas but I love the stories, the outfits and the romance.  Forbidden love set against a back drop of war or intelligent feminism trapped in a pre-progressive era.  It is recipe for fine acting and compelling reading and viewing; characters in Corrie don’t go through any life drama that isn’t experienced in an Austen or Dickens novel.
As my current acting contract draws to a close and I start to reconsider auditioning and re-applying myself to a full-time writing career this is one dream I cannot shake off, heaving bosoms, pointed glances and witty asides are never far from my mind.


I know we all cling onto compliments if we are told we look like someone famous (although I once went to an audition and got told I was like a young Anthea Turner???) and it is pitiable how much we enjoy these moments.
But if I had a pound for every time someone has said to me “Don’t you look the spit of that Lady Mary in Downton,” well I’d have at least a tenner.......
.......and I’d spend that on horse-riding lessons!
Posted by Daniella at 12:44