Fight for your Rights - passionate works of art reflecting life

I’ve noticed a recent trend in revolutionary inspired culture. A lot of new works of art are about speaking out, fighting for rights or against establishment. Pride the movie has enjoyed great critical success, Made in Dagenham the musical opened this week, United We Stand a new play about the 1972 builders strike in which actor, Ricky Tomlinson was involved.

Is it just a happy coincidence or does this say something about rumblings in life today? The news now tells stories of strikes popping up over the country; tube workers, teachers and this Monday, NHS workers in Bolton will be on a picket line for 4 hours over pay disputes. 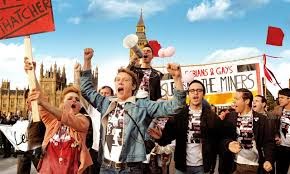 I bloody loved Pride the film. I went with my Mum on a quiet Thursday afternoon and left feeling elated and inspired. Not only are the cast sublime (to me, Imelda Staunton can do no wrong) but it is a story that was relatively unknown amongst ‘Joe Public’, how? The battles fought by both the mining and gay communities are humbling as you sit munching a £5 bag of Malteasers. Real prejudice, real poverty and real dangers, all tackled with humour and pathos.

Made in Dagenham was a successful film and I hope that the musical will enjoy the same support. I saw the company performing on Sunday Night at the Palladium, belting out with banners lyrics of repression, frustration and determination. Women fighting to be heard, not an unfamiliar story to many women today across the globe.

Ricky Tomlinson spoke on Radio 4 about the play United We Stand; he collaborated with the writer to tell his story of being jailed as a result of being part of the first national strike in the building industry to beat the government. It is touring the UK this autumn and contains poetry from Tomlinson’s time in jail.

I have always admired a drama school friend of mine who would go on anti-war rallies as a student and always sticks to his strong principles - but he was an anomaly in my social group.  In our parents’ generation (or so films like Forrest Gump or Billy Elliot would have us believe) people spoke out a lot more for what they believed in. Things have to become so unbearable that there is no other option than to fight. Do we take too many things sitting down these days? In my industry, actors often shout (well, project and support) when Equity does daft things but they rarely take action for fear of the hoards of younger, cheaper actors queuing up happy to step in and replace us. We have little solidarity in our union sadly because so many are desperate to work at any cost.

But outside of actors’ salaries, what about everyday life in Britain? Russell Brand recently spoke out citing a call for a ‘revolution’; whatever your feelings about this man with big hair and big ideas you can’t help but admire this passionate wordsmith. Maybe life is being to come full circle and we will be forced on to the streets once again as past generations were in the 70s and 80s. I don’t think I know anyone who doesn’t seethe at the sight of today’s politicians smarming on our TV screens.

I feel ashamed that I don’t seem to have such passion burning in my belly. I have never marched with a banner or protested for a cause. The nearest I have come to revolution is climbing the barricades every night for 2 years in imaginary 1832 Paris at The Queen’s Theatre. Again, this glorious show celebrated its 29th anniversary this week, proving that audiences love to watch people fighting for what they believe in. That being said, I cannot deny the feeling of fire and puffed up pride an actor feels when marching in that infamous Les Mis ‘V’ formation so I can only imagine what it may have been like for the miners and gay rights activists in the 1985 Pride march.
Now that I am away from those wonderful barricades the only time that passion forces me to speak out these days is when my boyfriend fails to turn off the bathroom light or safely behind my windscreen as I yell at an inept gym-honed blonde-highlighted drivers of 4x4s in the villages of Surrey.  Hardly a worthy outlet for passion.

They say that art reflects life so have we reached a time in our relatively passive society where speaking up is the only answer? Or do we just enjoy watching others do it?
Posted by Daniella at 15:00